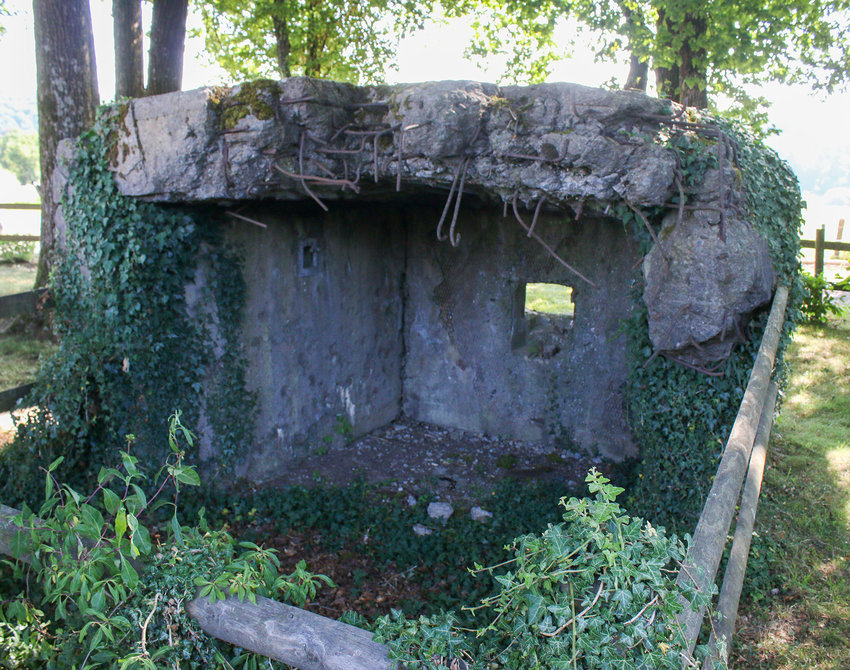 This damaged structure is part of a memorial to the 35th Infantry on the border of France and Luxembourg.
Stephanie Croston 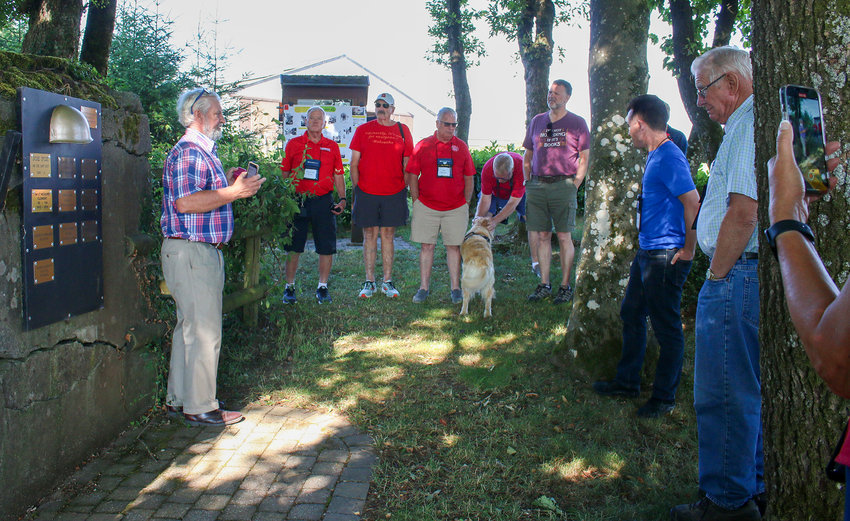 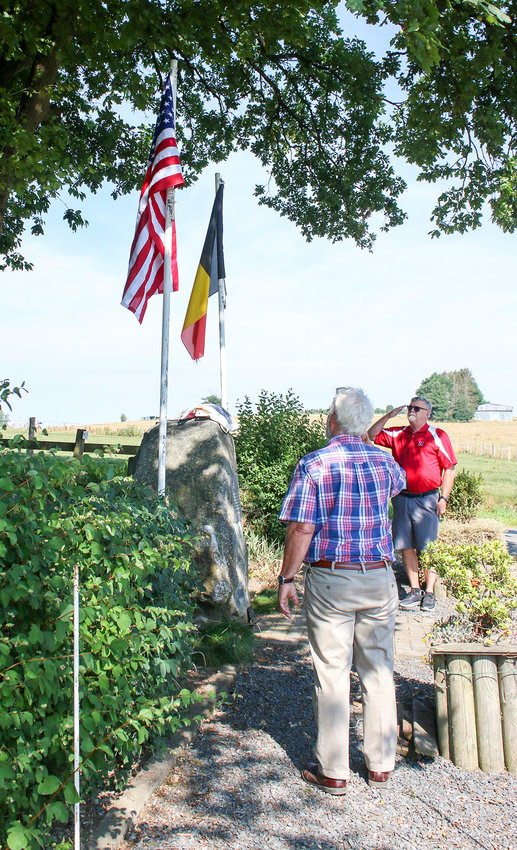 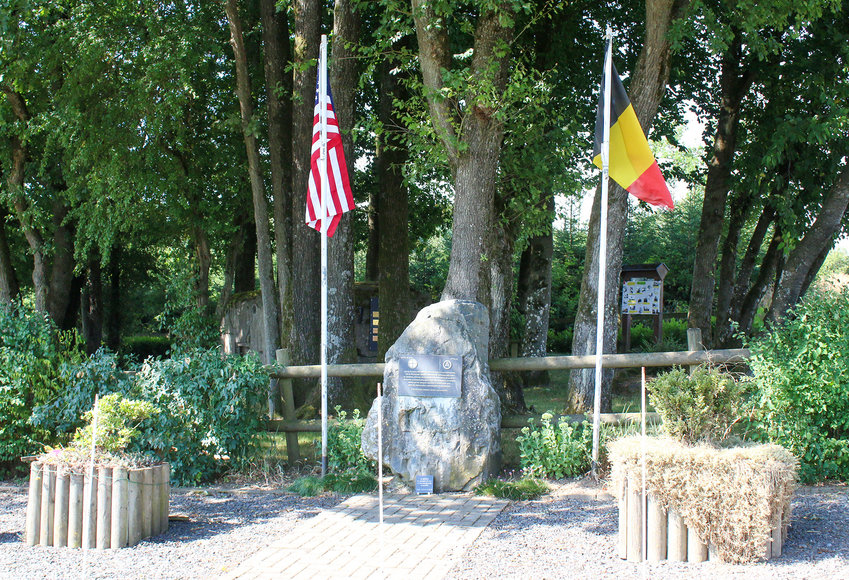 This memorial to the 35th Infantry commemorates their actions in 1944.
Stephanie Croston 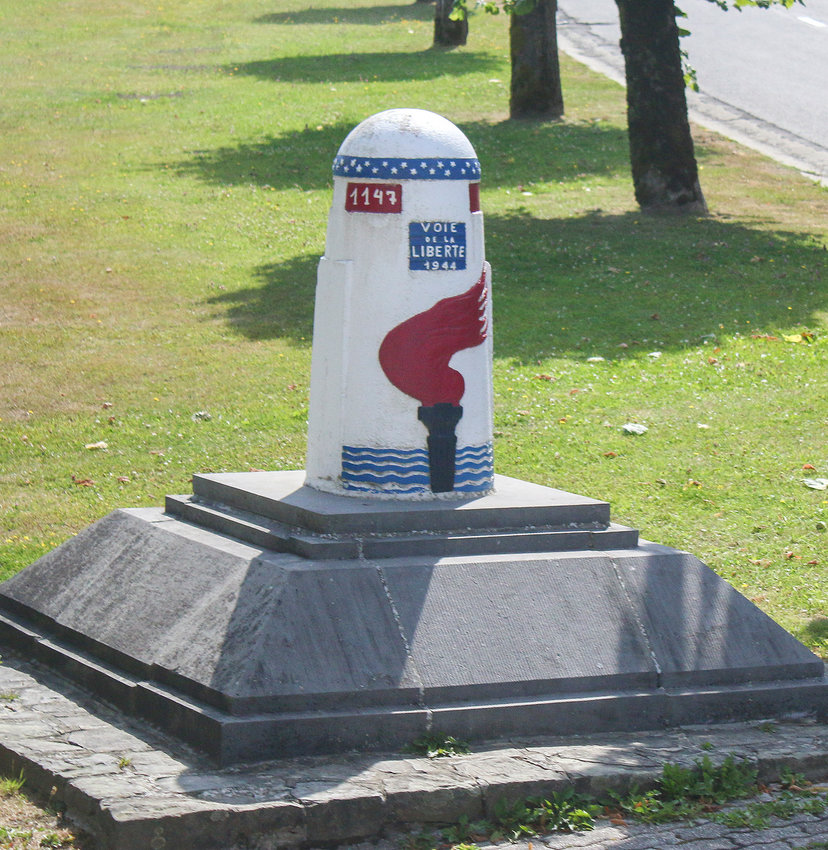 I saw the first one at Utah Beach. Here's the final one at Bastogne on the corner of the Bastogne War Museum property.
Stephanie Croston 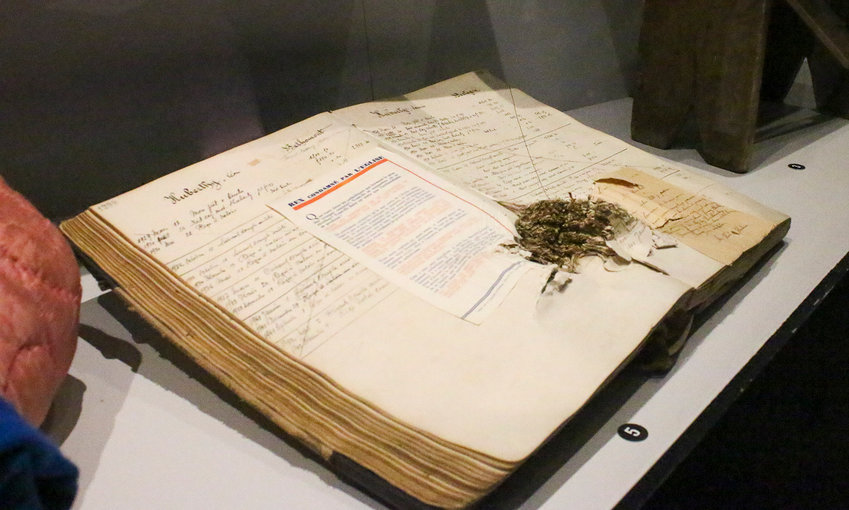 This ledger book took a hit during World War II. It's on display at the Bastogne War Museum.
Stephanie Croston 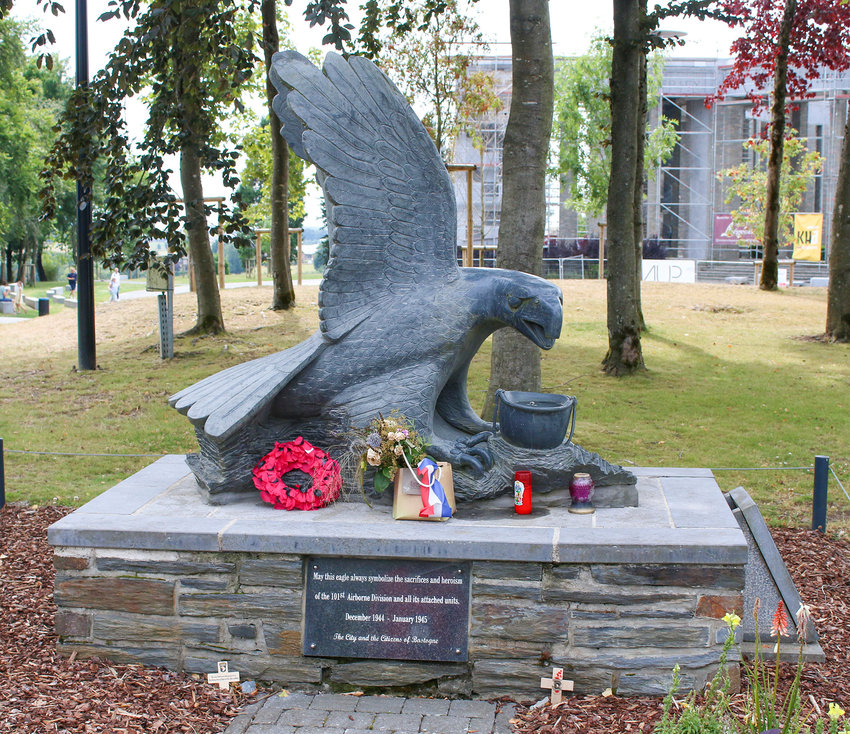 The inscription reads "May this eagle always symbolize the acrifices and heroism of the 101st Airborne Division and all its attached units. December 1944-January 1945."
Stephanie Croston 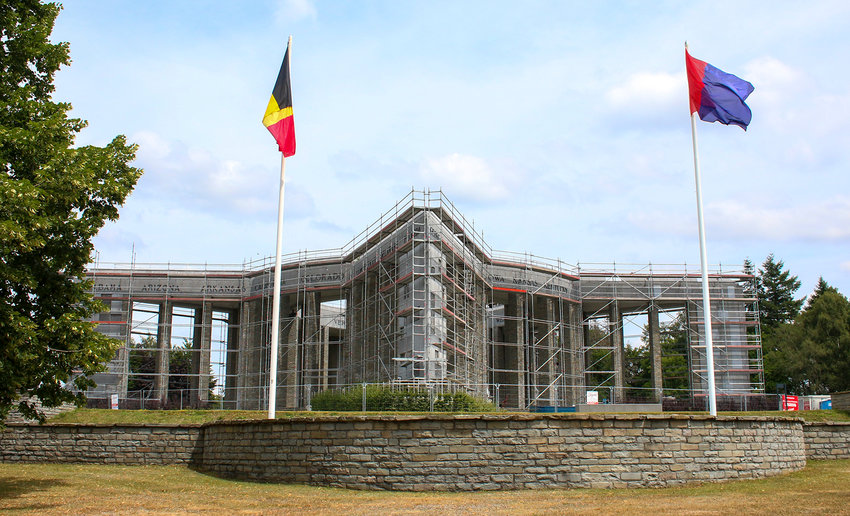 The Mardasson Memorial at the Bastogne War Museum is undergoing some work, but you can tell it's an imposing structure. The names of all the states are engraved around the top both inside and outside.
Stephanie Croston 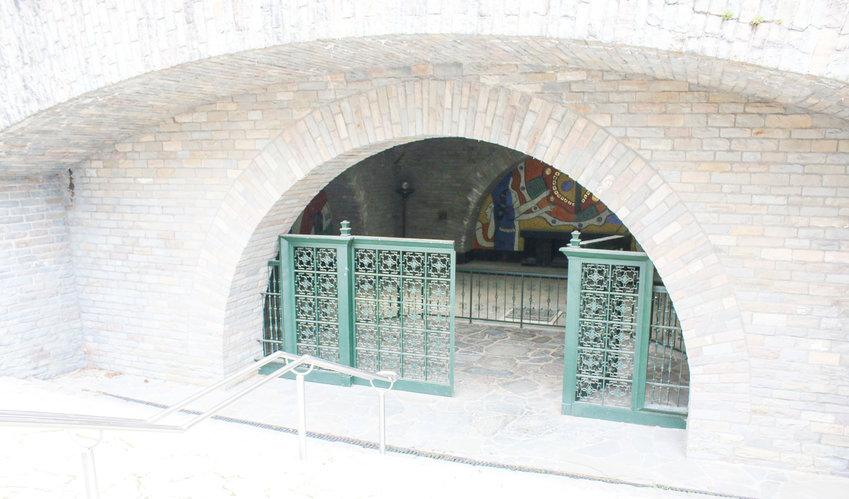 The crypt, located on the east side of the Memorial, contains three mosaics representing Judaism, Catholicism and Protestantism. It was dedicated in 1950.
Stephanie Croston 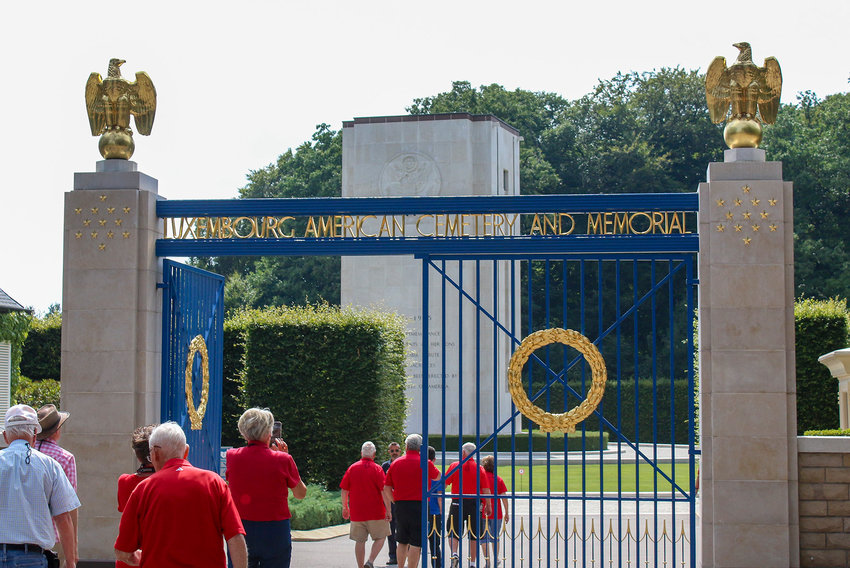 The grave of Gen. George Patton is probably the most famous at Luxembourg American Cemetery.
Stephanie Croston 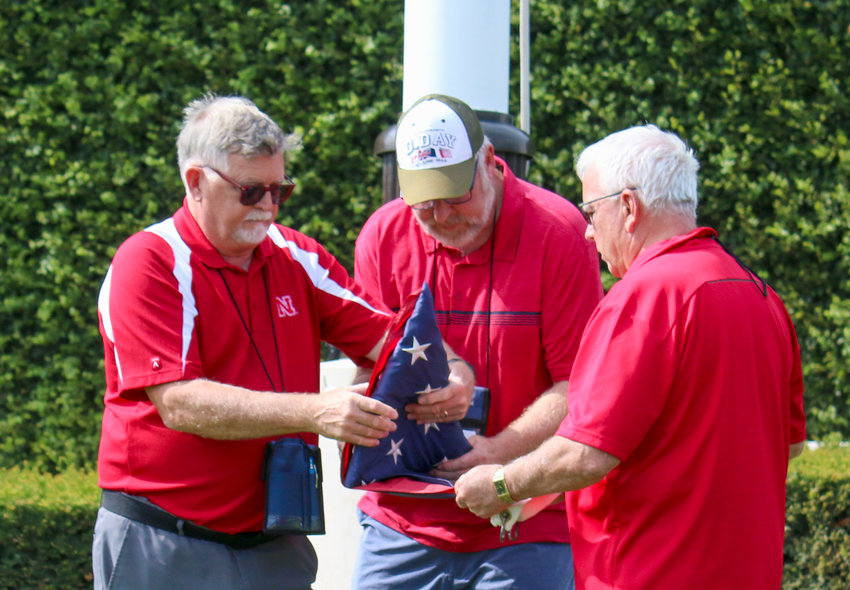 We were allowed to lower the flags for the close of the day at Luxembourg American Cemetery. From left, Dave Nore, Jerry Meyer and Alan Baldwin fold one.
Stephanie Croston
Previous Next
Posted Saturday, July 23, 2022 12:01 am
by Stephanie Croston, scroston@sewardindependent.com

We’ve been following the 134th Infantry 35th Infantry Division in its march across Europe. Today we stopped at a memorial near the border of Luxembourg and met Pat Shannon, who has learned a lot about the 35th and shared some of his knowledge with us.

The memorial itself is a battered structure with rebar showing and chips in the cement. Just seeing that makes you think about the force it took to break it apart. On one side are two plaques with lists of those killed. It’s off by itself in a little copse, but it’s well taken care of and quite picturesque. We brought a replacement United States flag for the site and raised it July 22.

We left there for the town of Bastogne and the Bastogne War Museum. As you walk through the museum, four narrators (an American soldier, a German soldier, a member of the Belgian resistance and a young boy) share their stories. I liked how they tied everything together and presented a different perspective on things. Among the items on display was a ledger book that had been hit by shrapnel.

After touring the museum, we could roam the grounds, which was also fun. Jerry and I walked around, looking at The Mardasson Memorial, which is a star-shaped memorial that features the names of all our states. It’s currently being refurbished, so it looked a little rough, but I’m sure it’s awesome.

We also found the crypt on the north side of the memorial. I know it sounds a little creepy, but it was actually extremely cool. It features three tile mosaics representing three religions – Judaism, Catholicism and Protestantism. The plaque in the middle reads “On July sixteenth nineteen hundred and fifty divine services were held in this crypt in honor of the gallant officers and men of the armed forces of the United States of America who fought in the Battle of the Bulge. 76890 were killed wounded or reported missing.”

The museum grounds also include the final mileage marker for the Voie de la Liberte 1944. The first, as you may remember, was at Utah Beach.

After we finished at the museum, it was off to Luxembourg. Our first stop was the Luxembourg American Cemetery and Memorial. Our wreath bearers were Nick Tuma and Courtney and Connie Meyer.

We visited the graves of the three 134th Infantry soldiers buried here. Also in this cemetery is Gen. George Patton, one of the more recognizable names from World War II. Patton was not killed during the war, however. He died in a car accident in December 1945.

One of the cool things we got to do, and when I say we I mean the military guys in our group, was lower the flags at the cemetery for the end of the day. What a great honor for our group! I know Jerry and Dave and Alan were humbled to be able to do that. Thank you, Luxembourg Cemetery.

We ended the day in Luxembourg City at Le Royal, a five-star (I know!) hotel. We had dinner there, a three-course meal that included a great chicken entre and two, county them, two, desserts. We spent two and a half hours over dinner, which is not unusual in Europe, we’re told.

More to come as the adventure continues - but not for much longer. :(