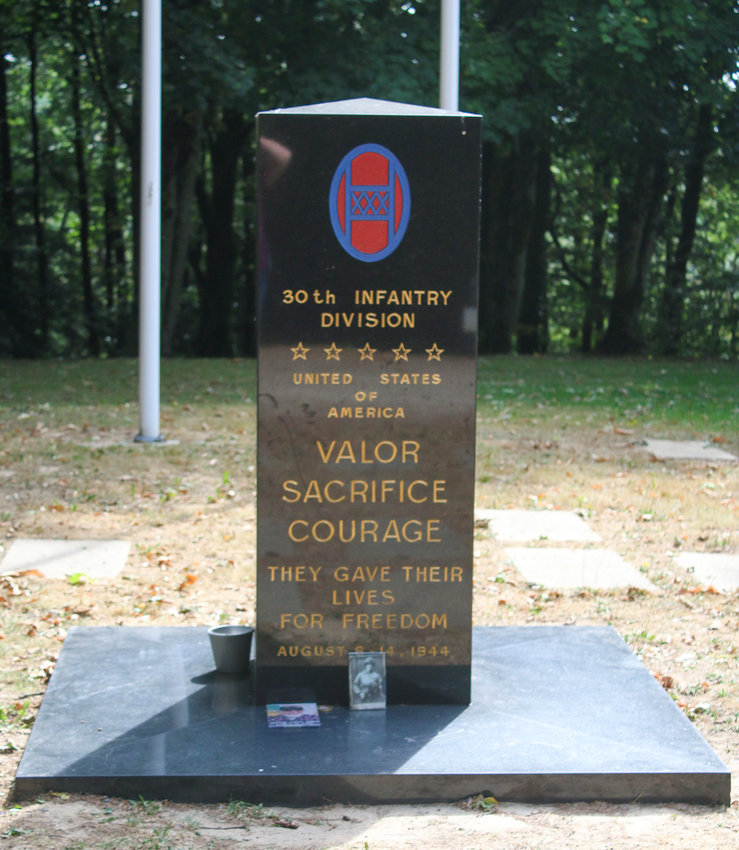 This marker at the top of Hill 314 at Mortain commemorates the 30th Infantry Division.
Stephanie Croston 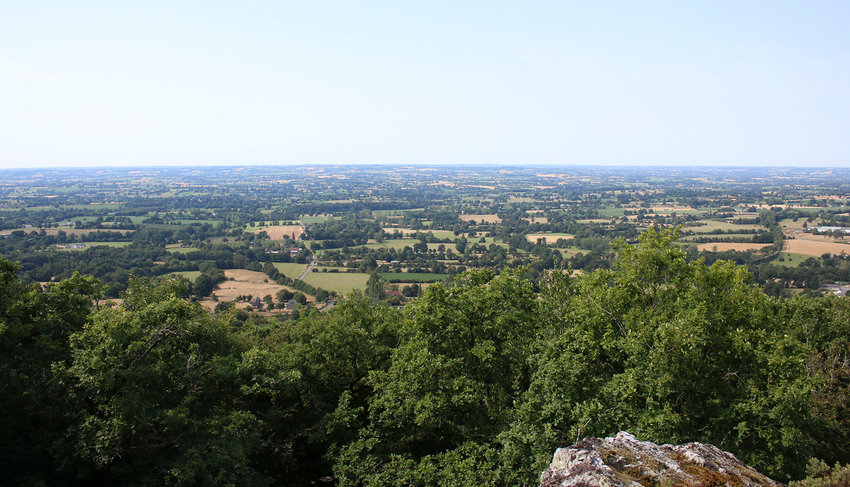 You can see the whole valley from the top of Hill 314 at Mortain.
Stephanie Croston

This memorial at the beginning of the path on Hill 314 says "Walk together on paths and leave traces." It was created with Mortain's sister city, Tannheusen in Germany, and includes footprints from people in both towns.
Stephanie Croston 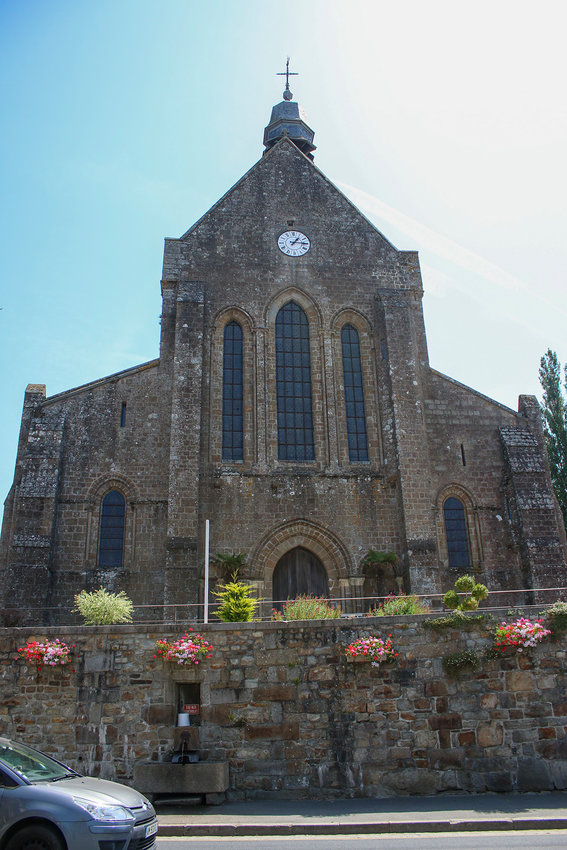 The cathedral at Mortain was across the street from where we had our noon meal.
Stephanie Croston 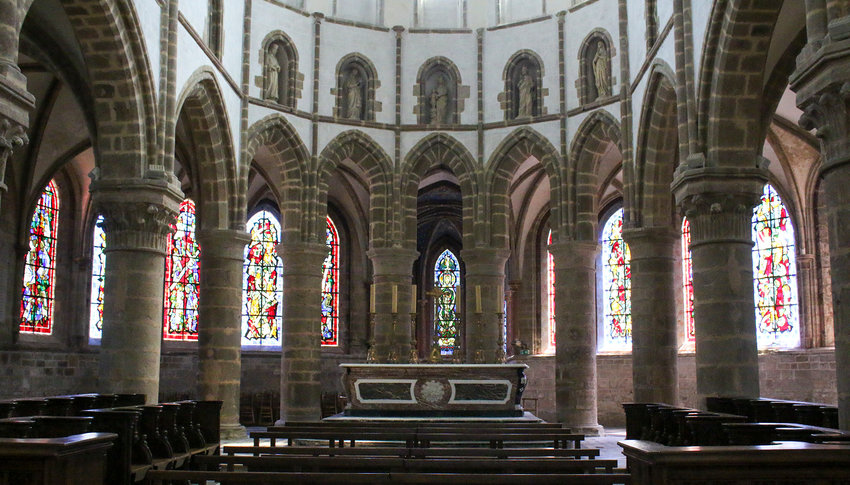 As is usual in the churches we've seen, the stained glass is amazing.
Stephanie Croston 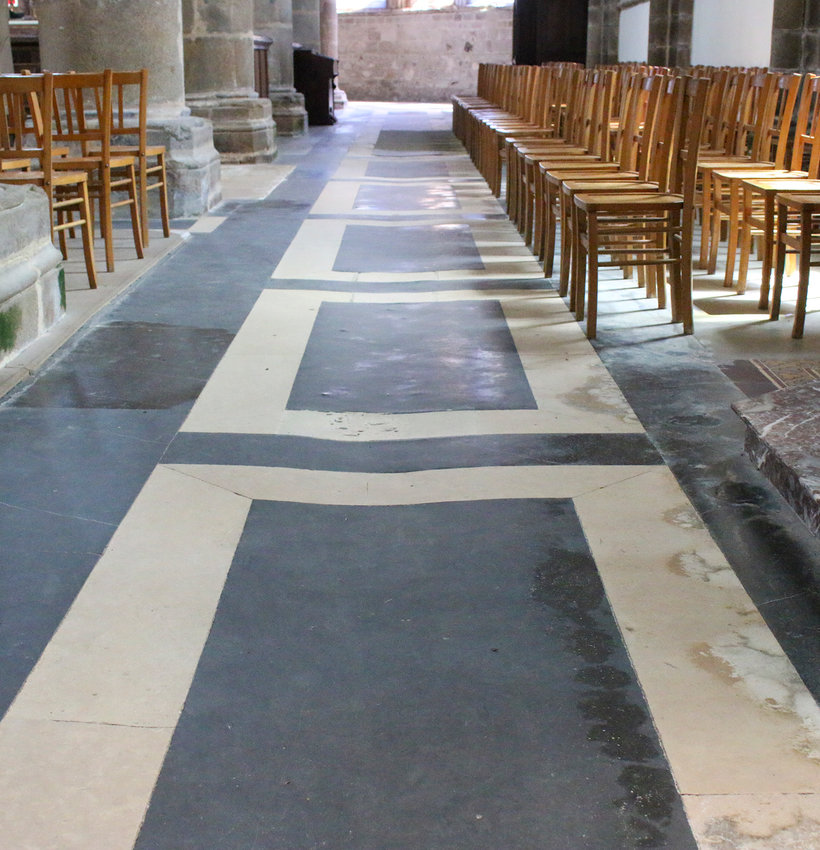 The floor in the cathedral has been worn into a groove by thousands of feet over the years.
Stephanie Croston 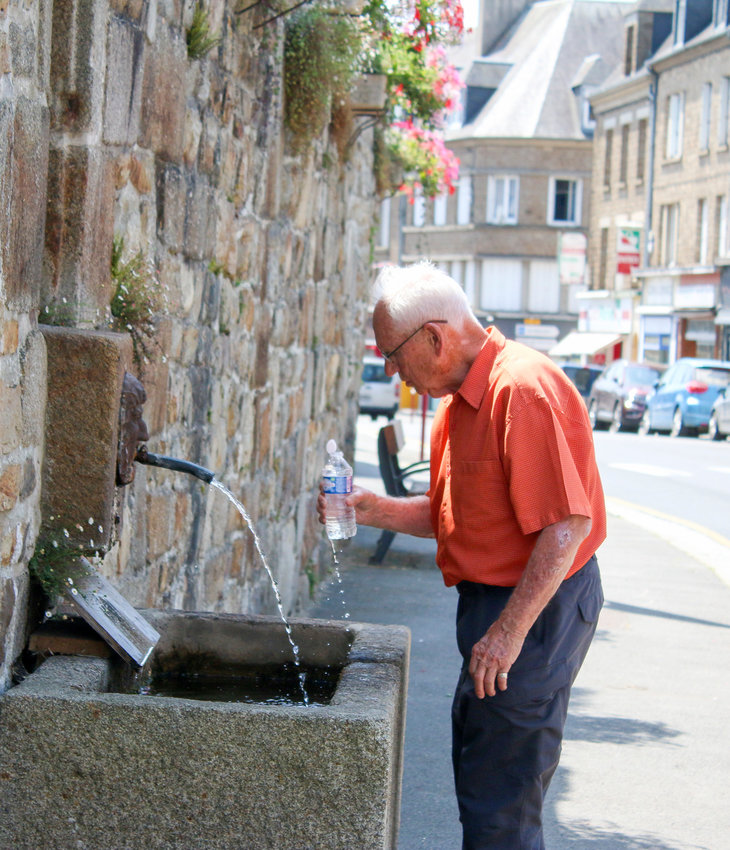 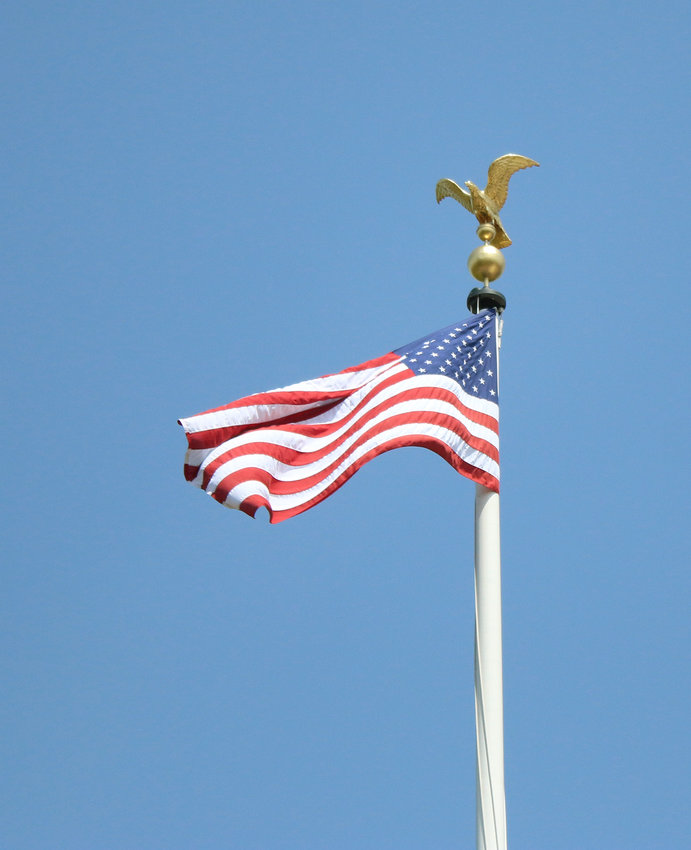 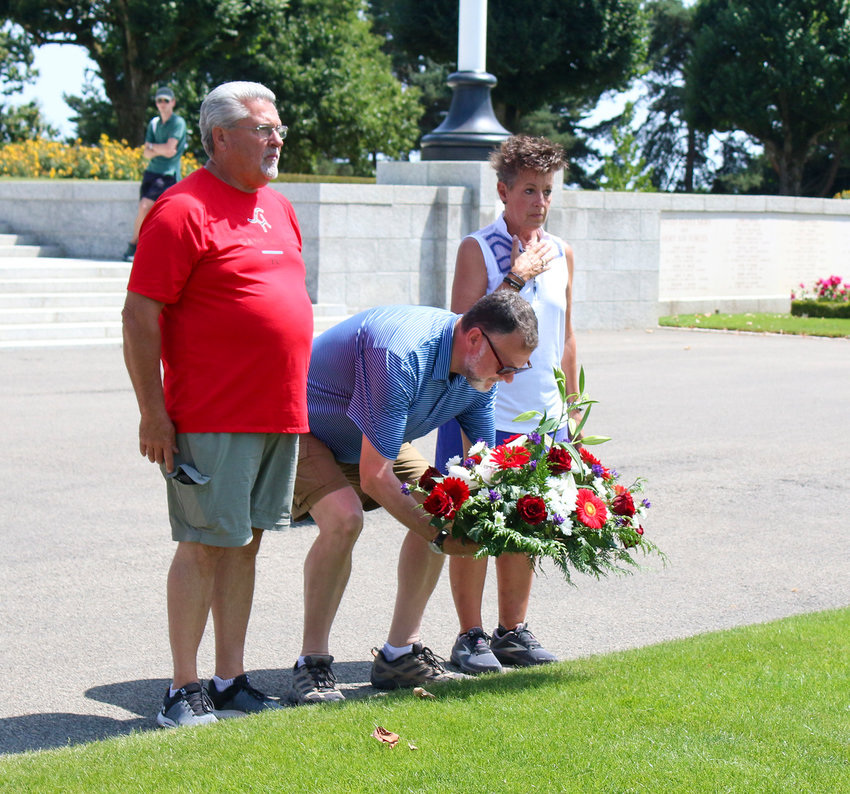 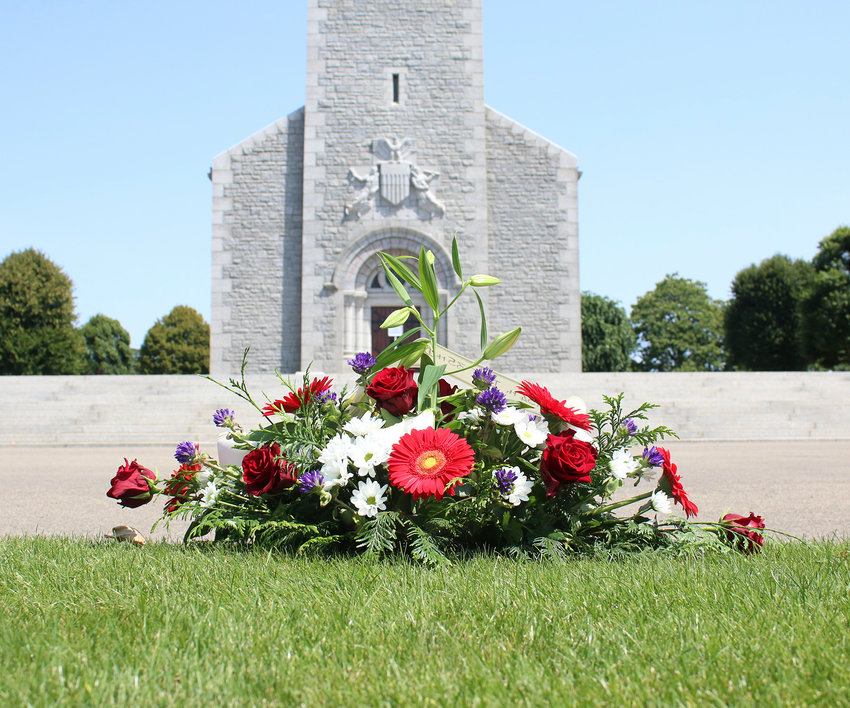 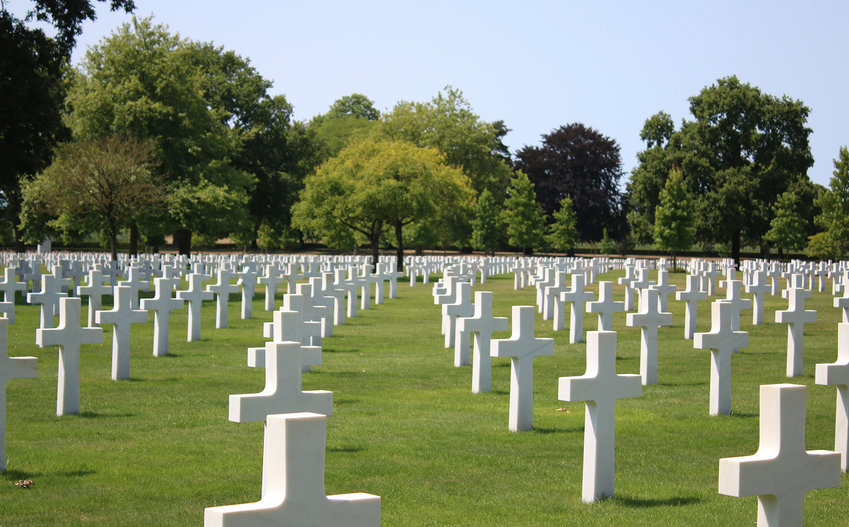 While they look straight from the front, the rows of crosses at Brittany American Cemetery actually curve.
Stephanie Croston
Previous Next
Posted Monday, July 18, 2022 8:30 pm
by Stephanie Croston, scroston@sewardindependent.com

Today we headed out to Mortain and Hill 314, so named because of its height above sea level. After a short walk thorugh the trees, we came to a chapel at the top of the hill which was backed by overlooks. You could see the entire valley from there.

At the parking lot is a memorial shared with Tannheusen, Montain’s sister city in Germany. It includes footprints from residents of both towns and encourages peace and forgiveness, Birgitta said. The inscription says "Walk together on paths and leave traces."

We had lunch at the Hotel de la Poste – a three-course dinner, actually, so lunch is a misnomer. We started with salad that included duck gizzards or something like that. Then came steak and baby potatoes. Dessert was a merengue and fresh fruit. We had a little time to look around, so I went to the cathedral across the street. It’s a working church, so the service got out while we were at dinner.

It included relics of St. Guillame Firmet, the patron saint of the town. When I stepped in, I could feel the floor was definitely used. There is a groove in the walkway where the feet of hundreds of parishioners have trod.

Brittany American Cemetery and Memorial was our next stop. We laid a wreath and found each of the six members of the Nebraska National Guard buried there, sanding their graves and taking photos. I did not go with that group, choosing instead to make my own way around the cemetery. The rows of crosses look straight from the chapel toward the memorial. When you look at the rows from the side, however, they curve. It was really neat to see.