It was a full day today

Mulberry Harbor at Gold Beach allowed the British to offload soldiers and equipment without dealing with the surf.
Stephanie Croston 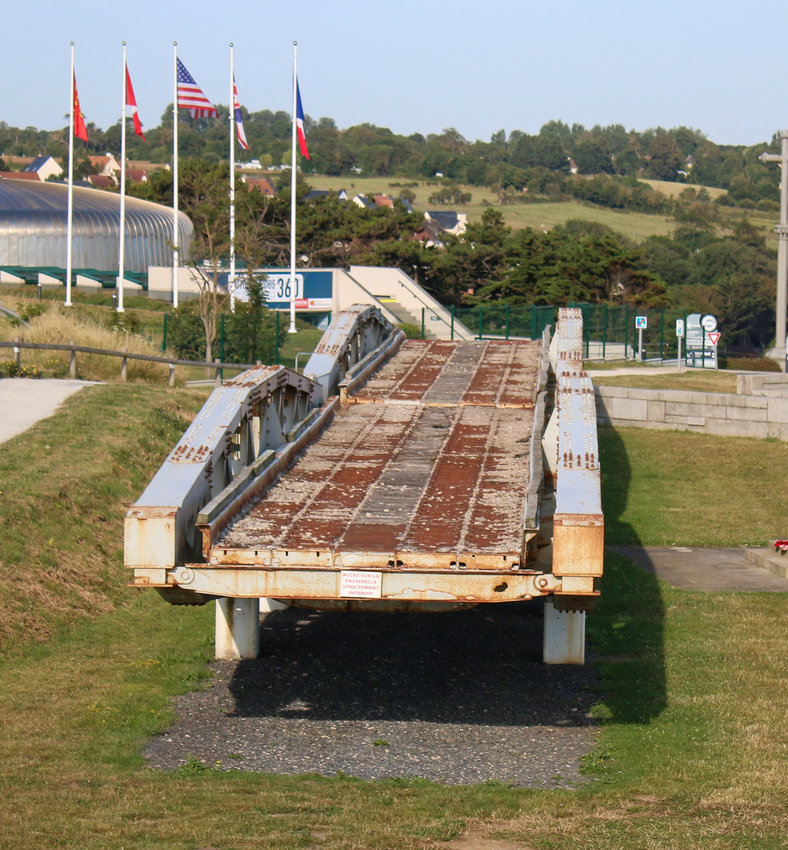 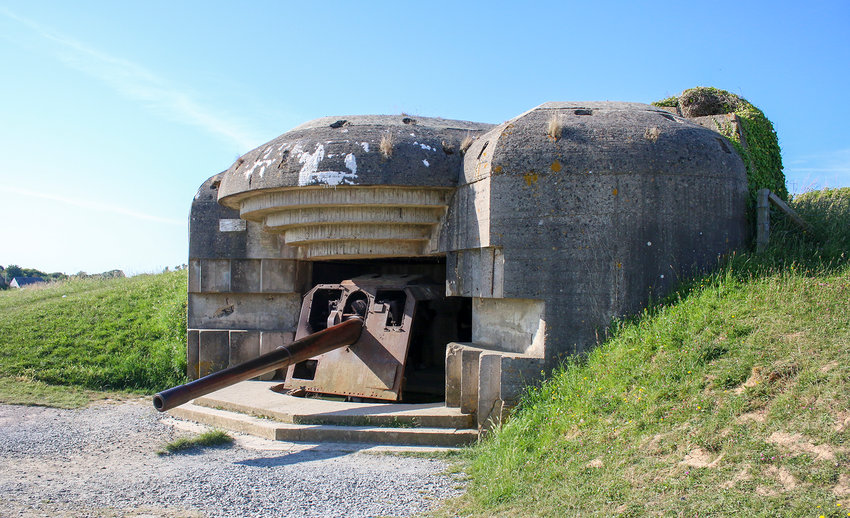 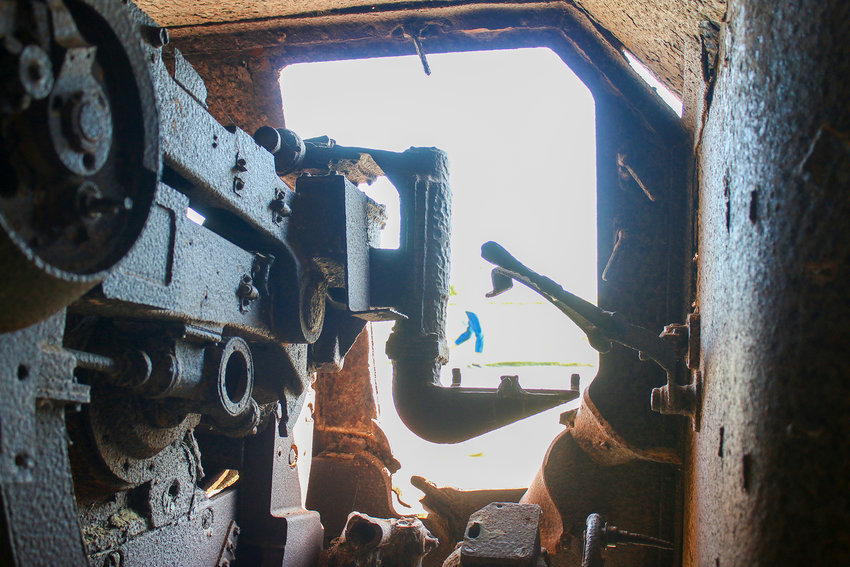 Looking out of the German bunker past the gun
Stephanie Croston 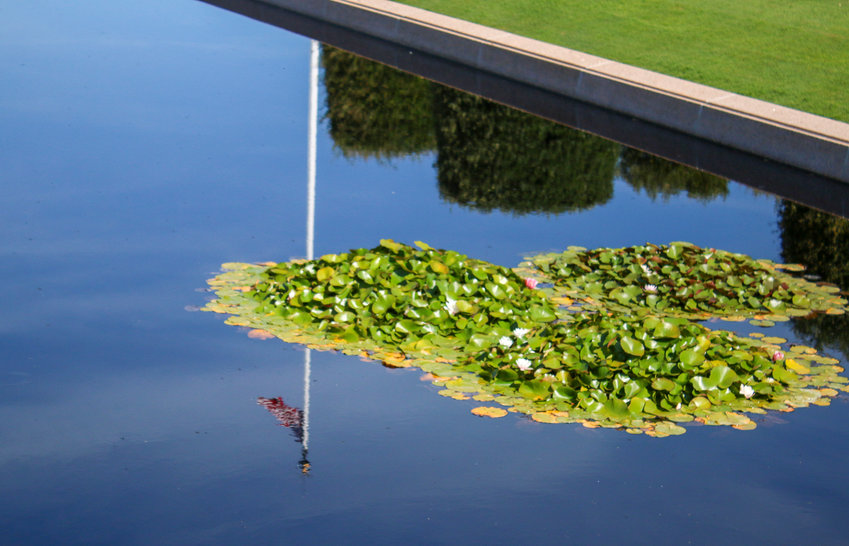 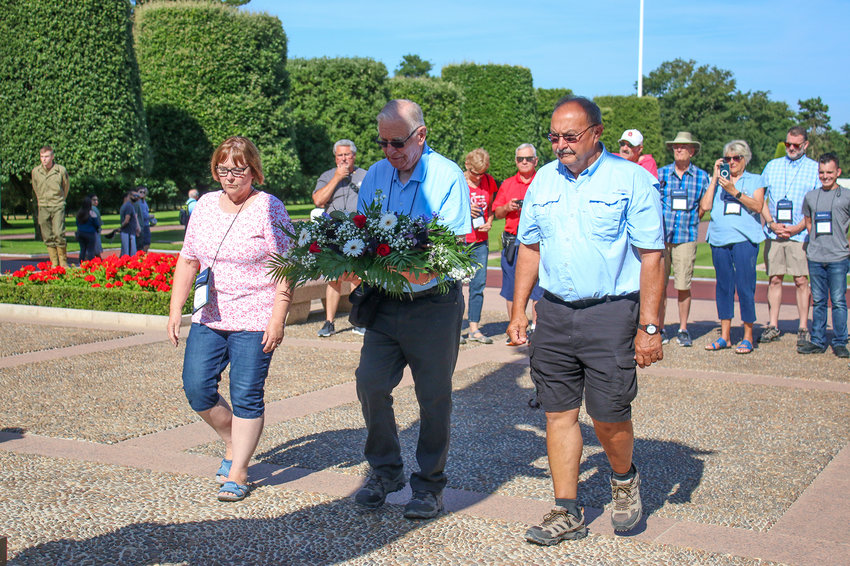 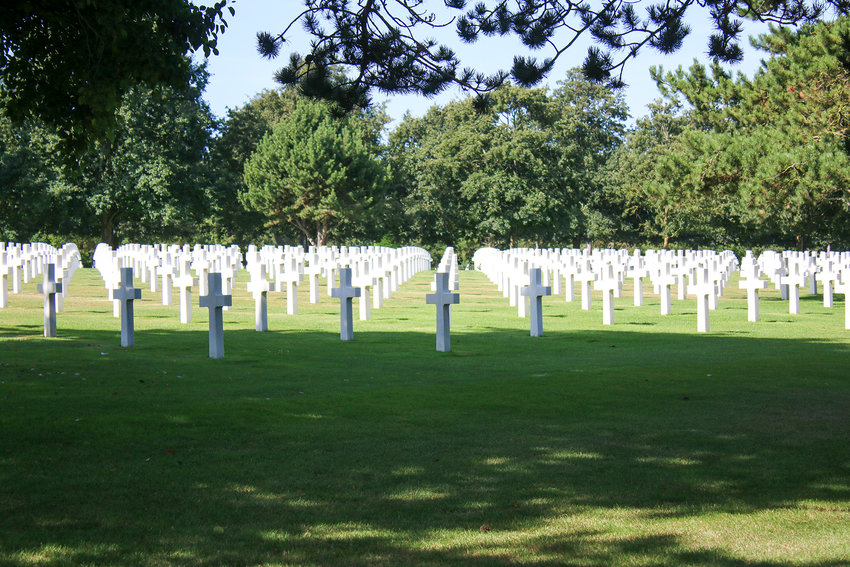 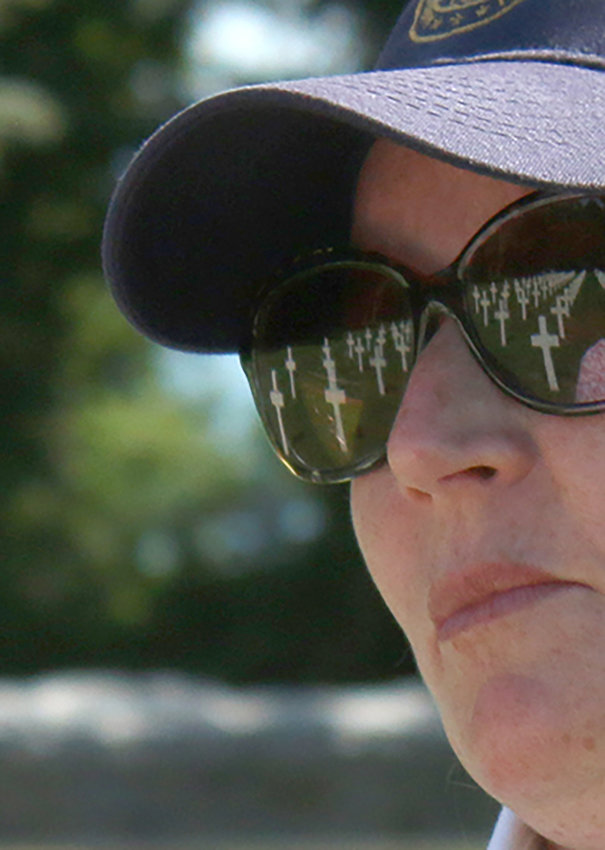 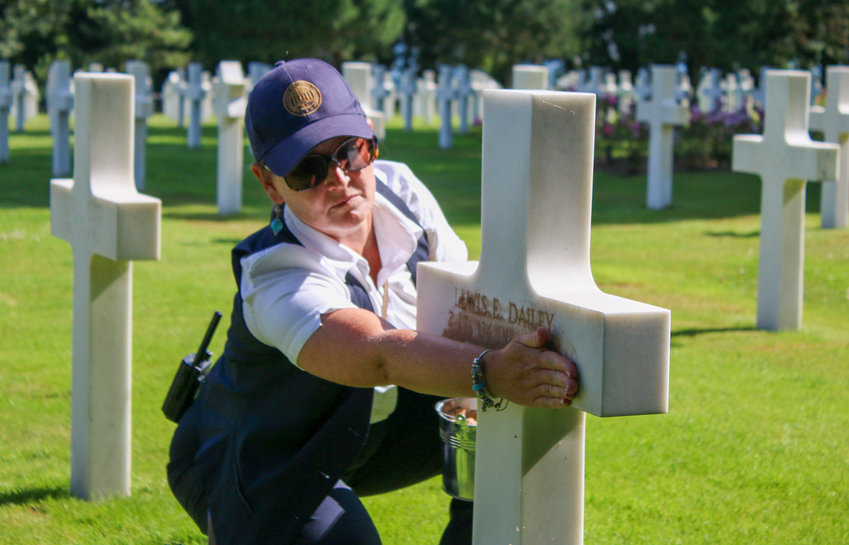 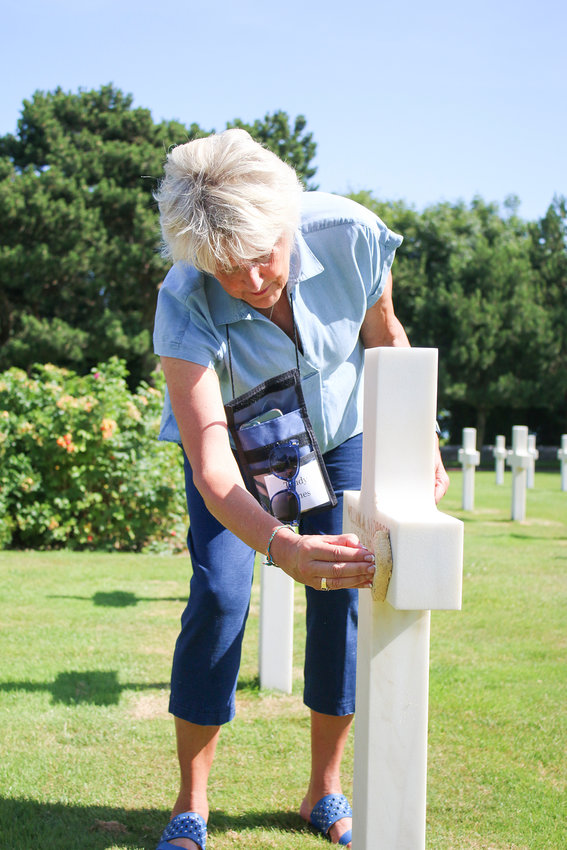 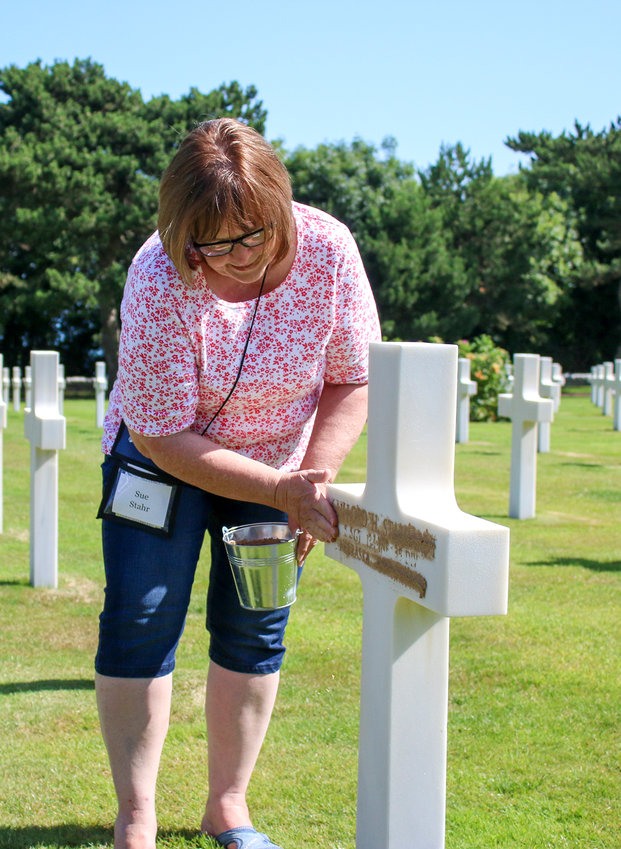 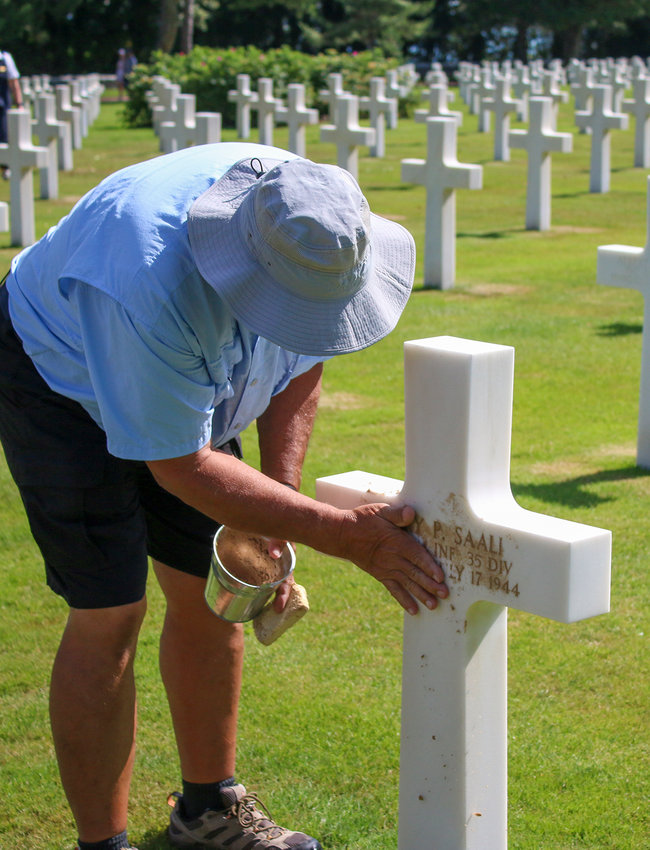 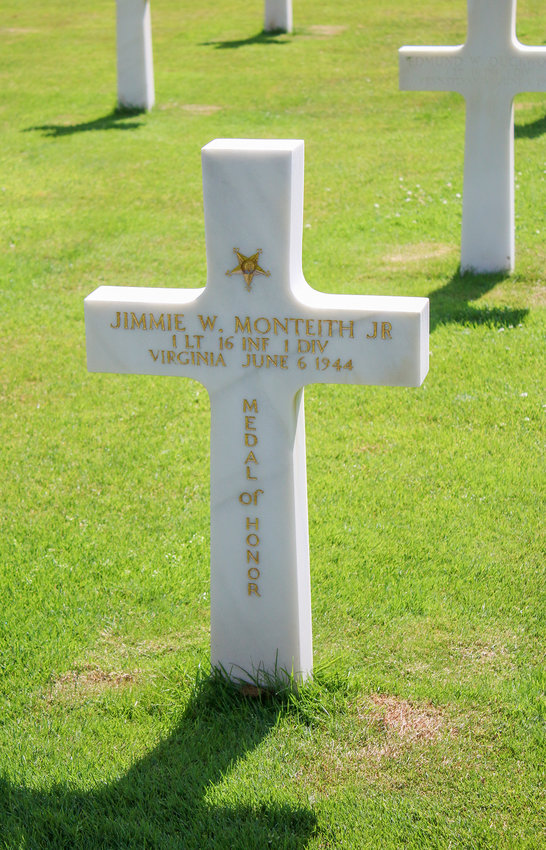 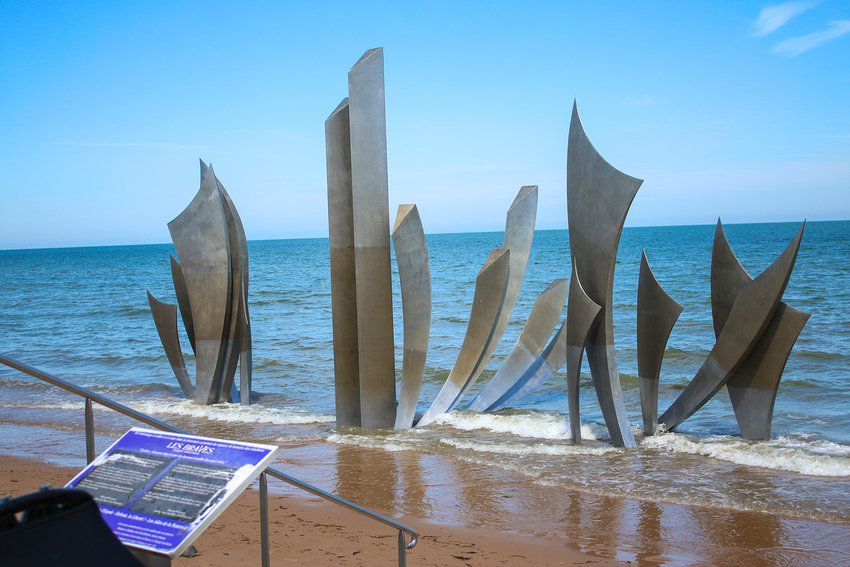 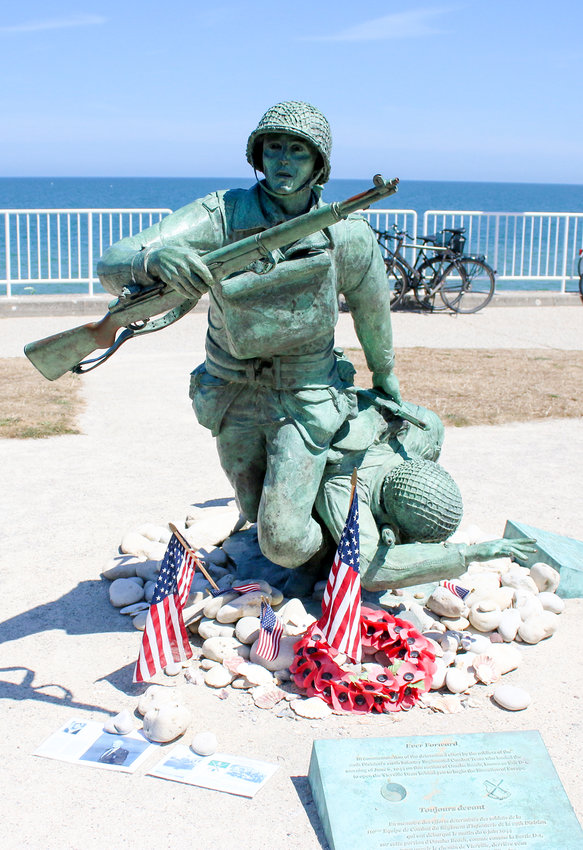 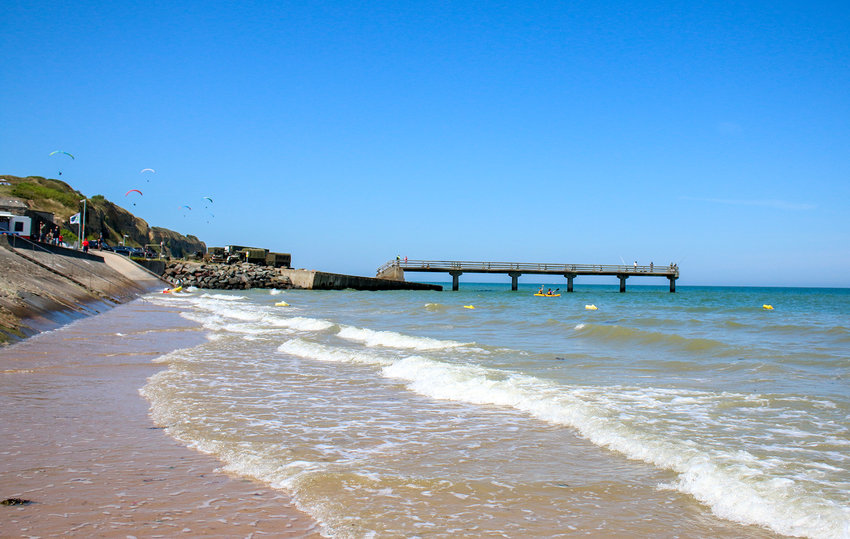 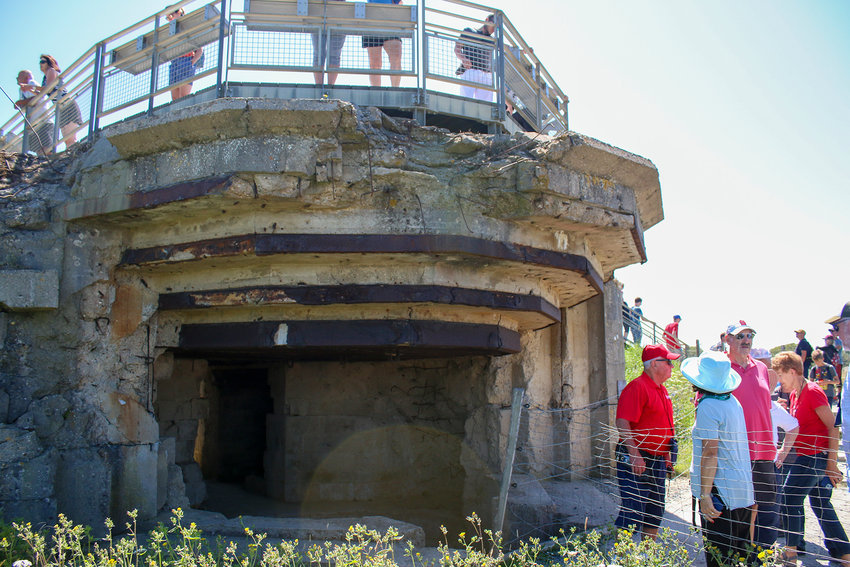 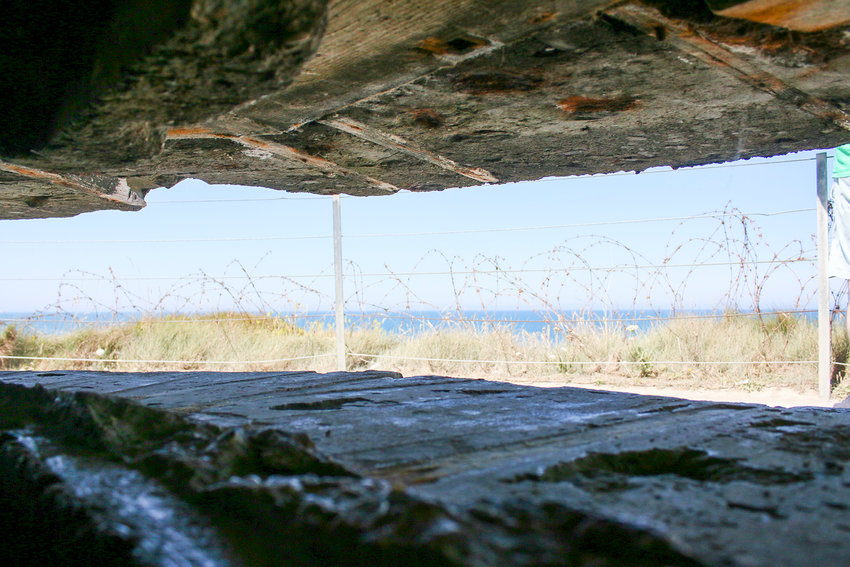 Connie Meyer and I went into the bunker. This was the view from the slit.
Stephanie Croston 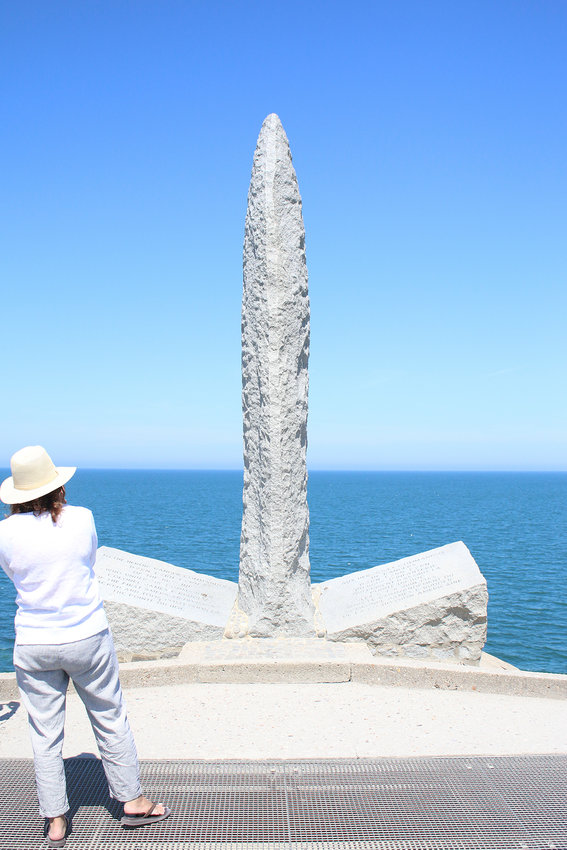 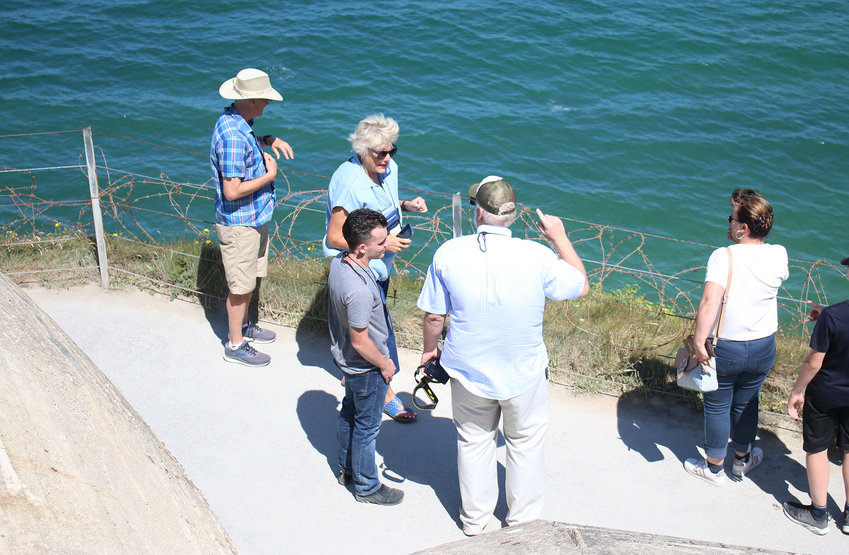 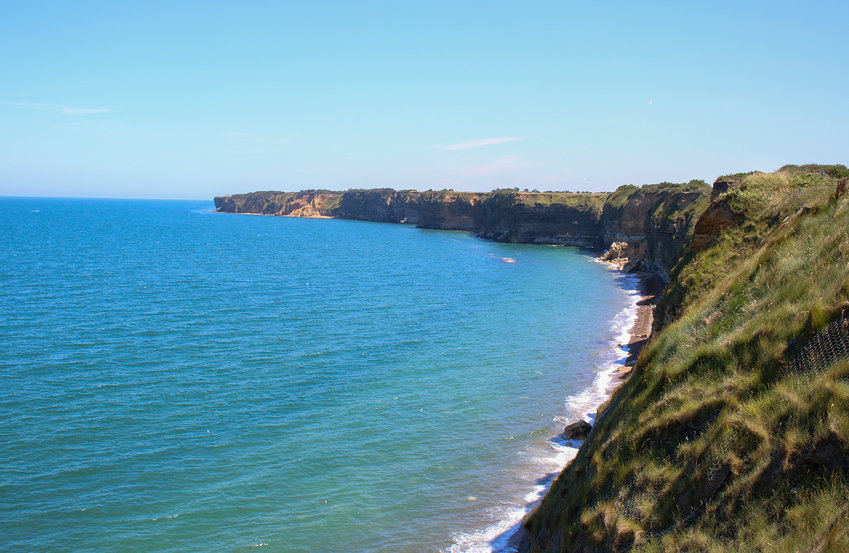 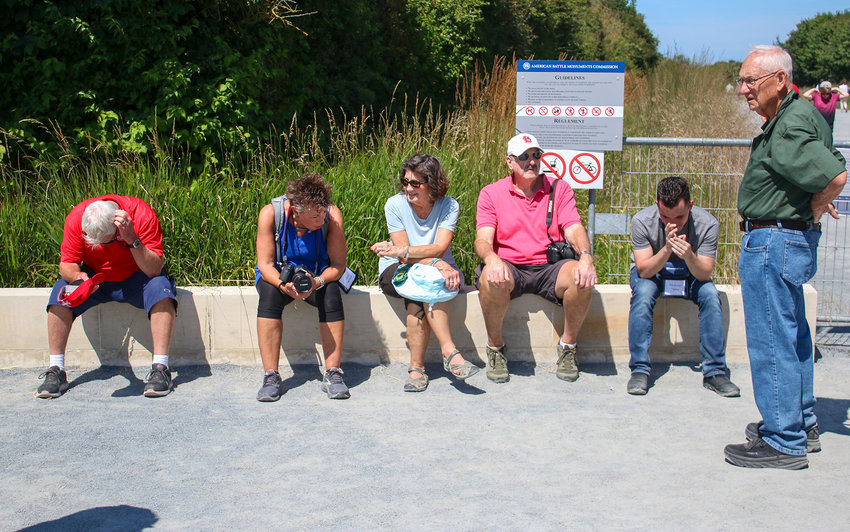 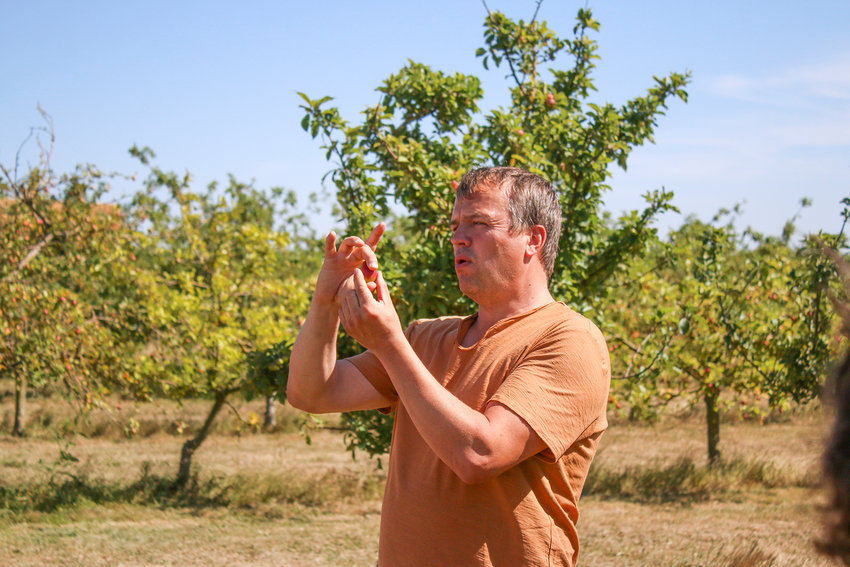 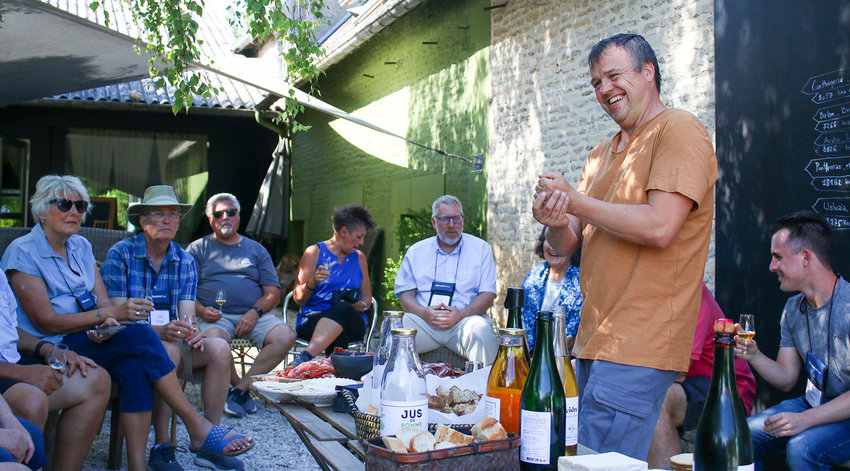 We started today at Arromanches with a look at mulberries. Not the fruit, the bridges. Mulberries were portable bridges the British built to help offload equipment from the ships to the shore. They created a temporary harbor, Mulberry Harbor, at Gold Beach (the center landing point for D-Day) and were able to bring thousands of troops and their related equipment into France. It was low tide this morning when we stopped at Gold Beach, so we could see quite a few of the temporary harbor walls.

The D-Day Memorial at this site was poignant. A statue of an old man, a veteran, sits looking at ghostly images of his younger self crossing the beach and fighting. Statements from combat veterans are carved into concrete blocks, things like: “We were ready to do our bit,” “We were under heavy fire all the time” and “To have survived is the real triumph.” It was one of those works where you just have to catch your breath.

A little further on, we stopped at German bunkers. These were relatively intact and included mounted guns so you could see what the Allied troops faced when they hit the beaches.

The Normandy American Cemetery was our next stop. As we entered the cemetery, we walked through the Garden of the Missing. Names of 1,557 soldiers never found or identified are carved on the wall.

We participated in a short wreath-laying ceremony that included the National Anthem, Pledge of Allegiance and Taps (which always gets me). I’m not the only one apparantly. Others said they “had dust in their eyes” following the final note.

But to see all the crosses lined up neatly, row upon row, and remember that each one represents a family bereft of a son/father/husband and that there are other cemeteries, bigger cemeteries, dedicated to World War II is sobering.

The cemetery is just above Omaha Beach, but we couldn’t get to the beach from there. The remains of 9,387 Americans are interred there, including 27 from Nebraska. We divided into three groups, each with a list of graves to visit and a guide to take us, and off we went.

The cemetery is located between two towns – Bayeux and St. Laurent-sur-Mer in Colleville-sur-Mer. From the west end of the cemetery, you can see the church steeple in St. Laurent. The two statues flanking that gap in the trees represent France and the United States. The French, Marian, holds a rooster which is the national symbol of France. The American, Columbia, holds an eagle which is the national symbol of America.

We found all six graves we were assigned and sanded them for photos. Now that’s not a Black and Decker sander with 200 grain sandpaper. They use sand from Omaha Beach to rub into the carved letters on each headstone. The sand makes the letters stand out and they’re easier to see and photograph.

Stephanie also took us to the grave of Jimmie Monteith, one of the three Medal of Honor recipients buried in Normandy American. She also took us to a new grave. Second Lt. William J. McGowan of Minnesota was recovered in 2018 in France and he was interred in Normandy July 9, 2022. She asked us not to take pictures because the grave isn’t ready yet. He crashed near St. Lo June 6, 1944.

We went to Omaha Beach next. There is a sculpture in the waves called “Les Braves” that is a tribute to the Allied soldiers who died. A little further down the beach is the National Guard Memorial.

Our next stop was Pointe-du-Hoc where the Army Rangers had to scale the cliff from the beach and were met by Germans firing from their gun emplacements. The Germans had their guns trained on the beachers, making them kill zones for the solders coming ashore. Craters from Allied bombs still pockmark the point, showing the destructive power of the shells they pounded the Germans with.

We finished the day at the Ferme de Billy, a farm that grows apples for apple juice, apple cider and Calvados. The farm has been in the Billy family for five generations. Olivier took us to the orchard (covering 40 acres and including thousands of trees) and showed us the distillery where the drinks are brewed. We went back to the restaurant and had a cider and cheese tasting. Since I don’t drink, I just had the apple juice, which was very good.

We also got to see the family chapel on the grounds. It was built in 1297, according to Olivier. It didn’t appear to get regular use, but it was neat to see anyway.