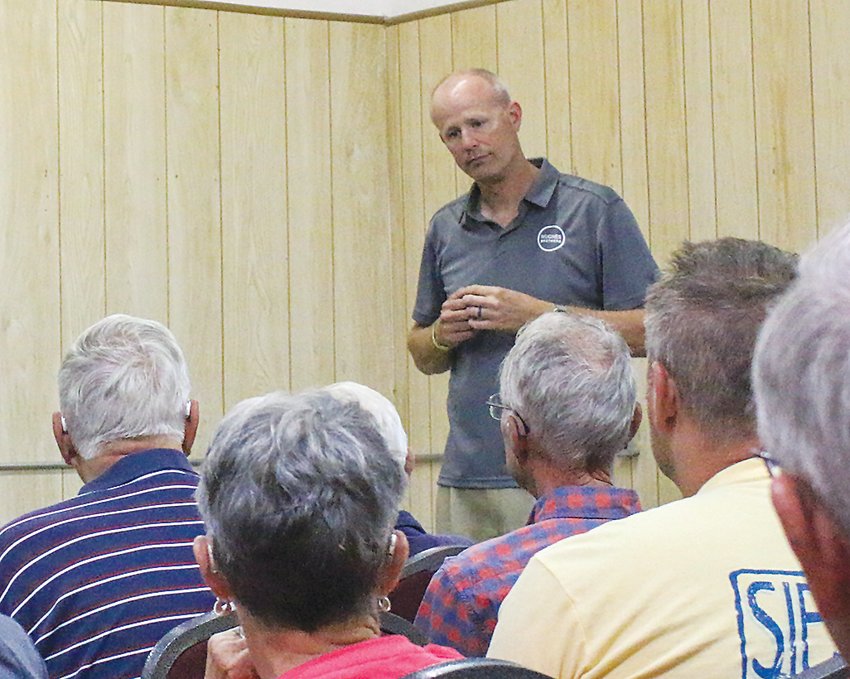 John Hughes listens to an audience question July 18 after his presentation at the Seward County Historial Society's quarterly meeting. Hughes is the president of Hughes Brothers in Seward and talked about their century of business.
Stpehanie Croston
Posted Wednesday, July 21, 2021 9:39 am
by Stephanie Croston, scroston@sewardindependent.com

For 100 years, Hughes Brothers has anchored the west side of Seward. Founded by four brothers, the business is still family owned and operated today.

John R., H. Burr, Ted and Ben were the four brothers who founded the business. Their father, John Morse Hughes, moved to Seward in 1893 to build houses. A skilled craftsman, the first Hughes opened Seward Planing Mills when he came.

In 1921, a storm hit the area and knocked down power lines. Burdette Boyes, who owned Blue River Power Company and was friends with Ben, asked for help with the infrastructure. That request transformed the business.

The first machine the brothers developed was an automated boring machine. Hughes said they took the differential out of a Cutting Automobile and modified it. That original boring machine is still on display at Hughes Brothers.

Hughes said they had to invent a sawmill to handle the logs used for the crossarms. At one point, the company had a log pond, he said.

In the 1920s, the company added steel fittings to its product list. They make their own bolts, stamped with the HB logo. The welding and forging departments have grown since then.

Hughes Brothers added a galvanizing division. There, workers add a zinc coating to the steel products to eliminate rust.

By the mid-1930s, the company had completely transformed from building homes to producing goods for the utilities industry.

World War II found Hughes Brothers asked by the War Department to add to its products.

“We were commissioned by the War Department to make things for the war effort,” Hughes said.

One of their primary products was ammunition boxes. More than one million were shipped from Hughes Brothers. They also made anti-tank mine casings and triggers.

The company was also tasked with constructing 120-foot wooden trusses for airplane hangers in Denver and Lincoln. The hangers housed the B29 Superfortress, Hughes said.

Floods in 1948 and 1949 led Hughes Brothers to do something about the Blue River. Hughes said the company decided to build a dike to protect the west part of Seward from flood waters.

“We built the dike on our own. It took five years,” Hughes said.

The final part of the dike was done by the Army Corps of Engineers, he said. Ted Hughes, John’s brother, is the current dike supervisor, assisted by Matt Stryson.

The company added a wood treatment plant in 1962.

In 1984, Hughes Brothers added a fiberglass plant to its opportunities. That was sold to Owens Corning in 2017.

His brother-in-law Doug Gremel was the driving force behind the fiberglass division.

When the division was sold, that freed up space on the Seward campus to expand the welding department, Hughes said.

When the electrical industry deregulated in the 1980s, Hughes said, the business went through a difficult time. From 1985-1995, it diversified, producing fiberglass rebar and timber bridges, including the one at Centennial Park in Seward.

“We built 53 bridges in the 1990s,” Hughes said, adding that they can be found all over the country.

In 1995, the third generation – Ted, John and Tim – stepped into leadership roles.

Hughes himself has done about everything at Hughes Brothers, he said. In high school, he was “the blueprint boy,” responsible for printing blueprints. He spent a couple weeks in each department after college to see every part of the company.

Products from Hughes Brothers are sold all over the world, Hughes said.

“We are more of a job shop, not an assembly line,” he said. “All our business is repeat business. We make sure every product is done right.”

Hughes Brothers’ work is 70% steel, 25% wood and 5% fiberglass, he said. Approximately 97% of the materials HB uses are domestic.

“We are an American company and our products are made from American materials for American consumers,” Hughes said.

Until the 1980s, products were primarily shipped via rail. Today, Hughes said, lumber arrives via rail, and products are sent out via trucks.

The company employs 280 people with a combined 4,000-plus years of experience. About half live in Seward County, with the rest coming from nine other counties in the region.

The campus covers 42 acres with 500,000 square feet under roofs. The company houses over 1,200 machines including 25 forklifts and two straddle trucks (which were featured in the July 4 parade entry).

Hughes described the company as community oriented. It has provided materials for the bandshell, bridges at the golf course, Concordia University and Memorial Health Care Systems.

It also created the Prairie Trails sculpture at the Nebraska National Guard Museum.

To recognize a century of operation, Hughes Brothers is planning a celebration in October. On Friday, Oct. 15, the business will be open for public tours from noon to 5:30 p.m.

A book about the company’s history is also available at Chapters Books and Gifts, the Nebraska National Guard Museum and Liberty House.

“There’s no place we’d rather be,” Hughes said.