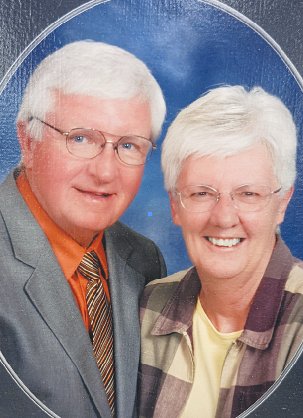 About 100 people turned out to honor the Stuhr family of Utica during Utica Heritage Days July 30.

“If you knew LaVern and Linda, you know they loved this community,” said Preston Stuhr, the couple’s grandson.

The family was selected by the Utica Commercial Club as this year’s Heritage Family, a tradition that has continued for many years.

Though LaVern, better known as “Churney,” and Linda both passed away – LaVern in 2021 and Linda in 2016 – the couple’s dedication to the community can still be seen.

“They will be remembered as people who participated in this town,” Preston read from a message a friend sent about the family as he spoke about his grandparents and their lifelong ties to Utica.

LaVern grew up on a farm outside of Utica.

A friend in kindergarten nicknamed him “Churney” because “he was always churning up trouble,” Preston said.

LaVern was heavily involved in FFA and began work at the local farmers cooperative at age 18, graduating from Utica High School in 1965. He served in the Air National Guard from 1965 to 1971.

Linda (Simonsen) was born in York and graduated from UHS in 1966.

They have two children, Mitch Stuhr and Angie Miller, six grandchildren and one great-grandchild.

LaVern worked at the Utica Co-op Grain and Lumber Company for 42 years, retiring in 2008.

Linda worked at York State Bank, First Bank of Utica and most recently served as secretary to the principal at Centennial Junior/Senior High School.

Family and friends spoke at the Heritage Days recognition, sharing memories of the couple – everything from the time LaVern fixed a hole in the family car’s gas tank with nothing but bubble gum, to the time Linda survived a bank robbery.

“It was me, Linda and Betty Daake who were working when the bank was robbed,” family friend Jody Wiemer said. “A man came in and jumped up onto the counter and told us to get down on the floor.”

The man directed Daake to get the money, which he took, then jumped down.

“He put a paper sack on the counter and reached in like he was turning a knob,” Wiemer said. “He said, ‘This is a motion bomb. You move, you die.’ Then he ran out.”

Well, the man’s leaving created motion, which didn’t set off the “bomb,” so the women thought it was safe to move.

“Linda reached up, her hand shaking, and grabbed the phone on her desk and called 911,” Wiemer said. “She was the hero with her shaking phone that got us out of there.”

The paper bag contained nothing but two cans of oil, and they never recovered the money.

“But it was a moment of bonding for Linda and I,” Wiemer said.

LaVern helped maintain the Utica Cemetery over the years and became involved at the Utica Community Senior Center.

He was a member of the fire department and served as an usher, elder and trustee at church.

He helped bring about the veterans memorial along Utica’s main street and also raised a lot of money for the community.

“He was always selling raffle tickets to everybody he knew,” family friend Jamie Kovac said. “Everybody knew him from towns around.”

Linda, he said, was always in the know about people around town and what they were up to at any given time, and she was always one to speak her mind.

“She was straightforward and honest,” Kovac said. “I liked that about her.”