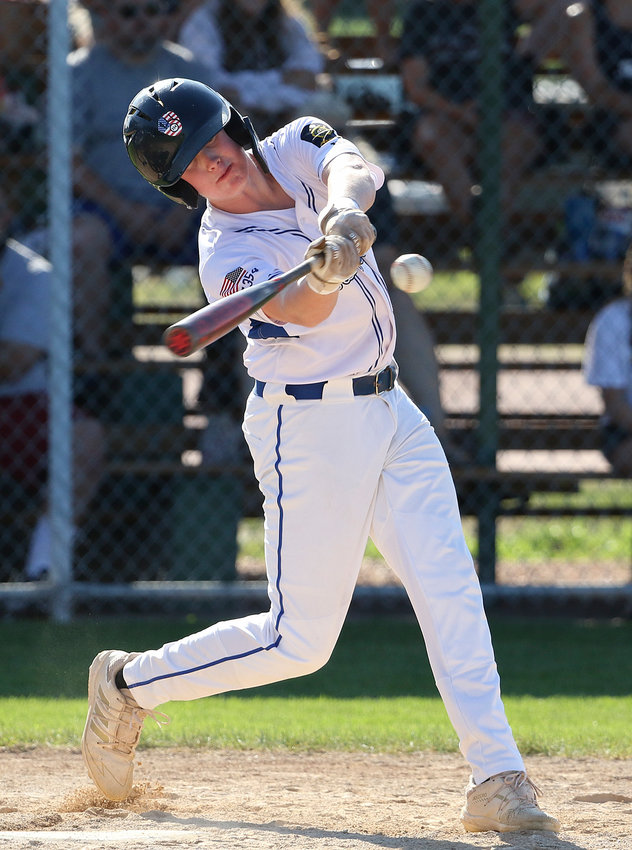 Malcolm's Carson Franks zeroes in on a pitch during the championship game July 28.
Doug Carroll 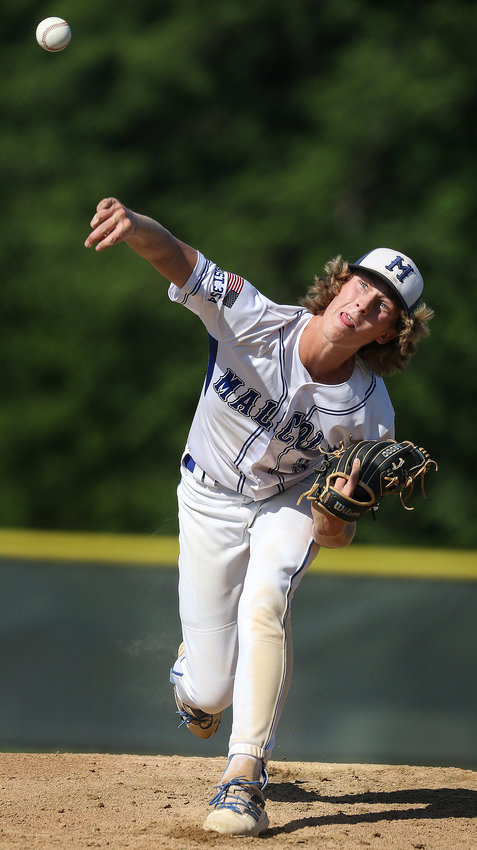 They did what most teams do when they win it all. They dog piled at the mound.

After Maddox Meyer fired in the last pitch of the July 21 Class C Juniors state title game, he knew he was about to get mauled. It was a swing-and-a-miss for Meyer’s 13th  strikeout of the game as Malcolm finished off an impressive 5-0 run through the field.

“On that last pitch is really when it hit me that we were one pitch away from winning state,” Meyer said. “When the parents and fans started the slow clap, I got chills. I had to take a deep breath behind the mound and me and (catcher, Luke) Schmidt just smiled at each other before I threw the pitch.

“Once I saw the swing and miss, I instantly threw my glove up and the celebration began with Hayden (Frank) and me being in the bottom of the dog pile.”

The piling on of Meyer and Frank was well-deserved as the duo put up crazy numbers during the program’s first juniors’ state title in a decade. Meyer allowed no runs in more than 12 innings during two appearances while striking out 22 batters.

“I had full control of both my fastball and curveball,” Meyer said. “It helps when both of those are working and you can throw them in any count. Luke and I were working really well together, and he always knew what pitch to call to throw off the batter.”

Frank was the tournament’s most dangerous hitter. The senior-to-be posted a .529 batting average while blasting three home runs and three doubles and driving in 12 runs. Two of his home runs - including a grand slam – ended games by mercy rule. One of his line drives also dented the yellow fence cap on Creighton’s outfield wall.

“During districts I was overthinking my swing and struggling a bit,” Frank said. “Once state came around, my mentality just went back to see ball, hit ball, quit thinking.

“After the first solid hit, my confidence went up to where I felt I could drive in a run during any at bat.”

Mason Wisnieski came into the tournament with an unheard of batting average above .700. He stayed hot by hitting .643 at state. On the mound, he fanned 18 batters in nine-and-two-thirds innings while walking none and allowing only one run.

“I was just trying not to make too big of a moment of it,” Wisnieski said. “I wanted to play it like it was any other game.”

It takes more than three players to complete the kind of run Malcolm had this  season. Many unsung heroes answered when their number was called.

“We had so many guys step up,” Frank said. “Like Garrett (England) who hasn’t played that much during the season. Then, state rolls around, and he plays almost every pitch and had clutch hits in key times.

“Another is Tyler (Thieman). No matter the score, the situation, it doesn’t matter, you always hear him. Yelling, talking a teammate up, or creating some laughter to ease the situation.”

“A big part of our success is the depth of our pitching staff,” Meyer said. “Owin Little was huge against Pender. He pitched four solid innings. He also ended up hitting two doubles.

“Carson Ramsier is our bullpen catcher. He didn’t get into any game, but he always had his shin guards on ready to warm up anyone at any time.”

From the first game through the last, the support for this team has been strong, even at a tournament nearly three hours from home.

“It’s unmatched,” Frank said. “When we are filling a whole grandstand and people are lining the fences in a game that’s so far away, that shows the support.

“People took time out of their Thursday to watch us play and that means everything to us. It’s the most amazing thing playing for this community.”

Meyer, Frank and Wisnieski are among 11 dual-roster players who also compete with the Malcolm seniors who are currently on a postseason run that they hope results in another state title.

“I know we can do it again,” Frank said. “We’ve set ourselves up to be where we need to be. We have the pitching, we have the players, and we have the will do whatever we need to.”

“The seniors route will be a lot tougher,” Meyer said. “But I believe we have the confidence and the guys to do it.”