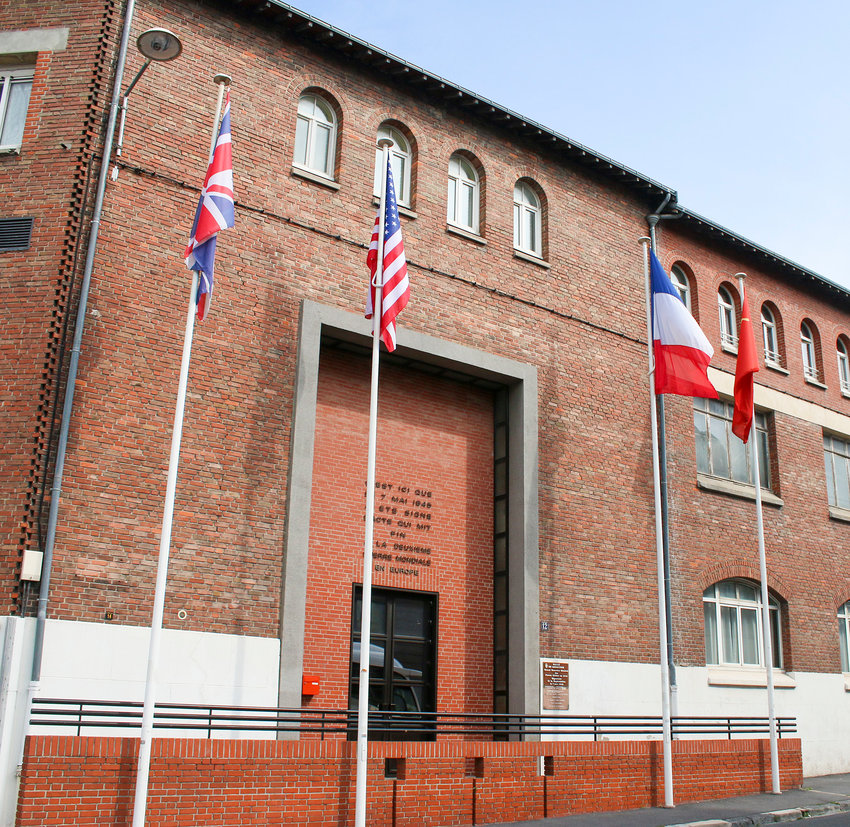 This building in Reims houses the room where the surrender documents ending the World War II in Europe were signed. The maps on the walls are the same, as are the nameplates on the table and chairs.
Stephanie Croston 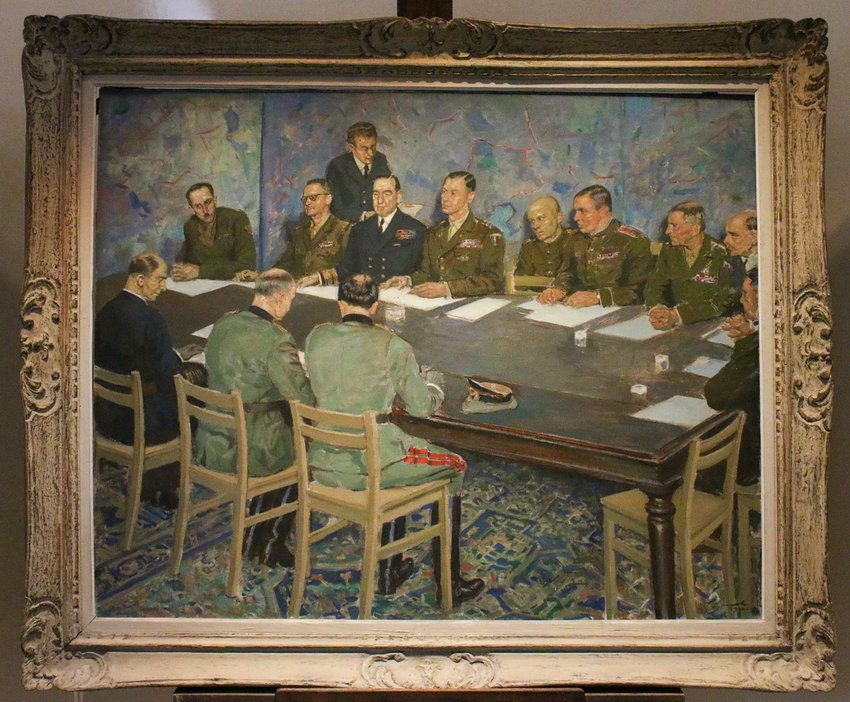 This painting, on display at the museum in Reims, shows where everyone was sitting during the official surrender signing.
Stephanie Croston 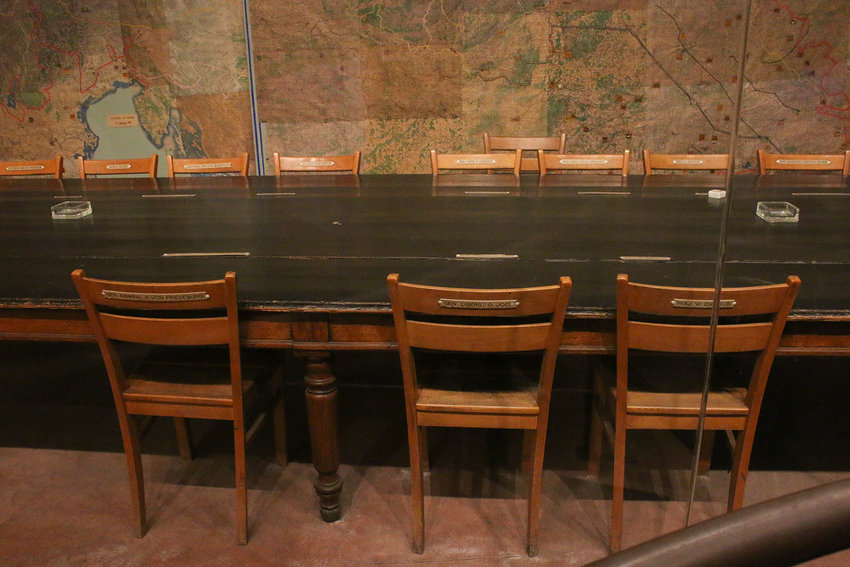 Gen. Oberst Jodl of Germany sat in the center chair on this side of the table to sign the official surrender in 1945.
Stephanie Croston 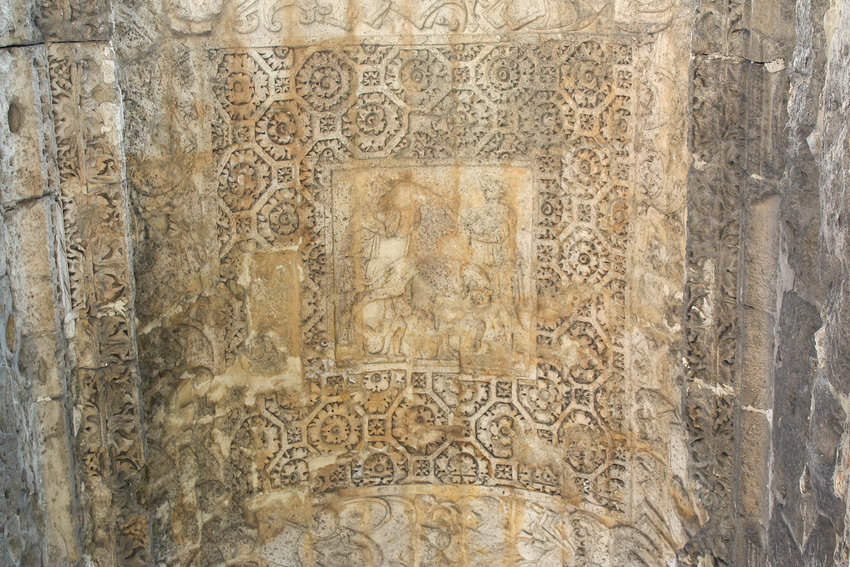 The arches of Le Porte de Mars in Reims are decorated with artwork, too.
Stephanie Croston 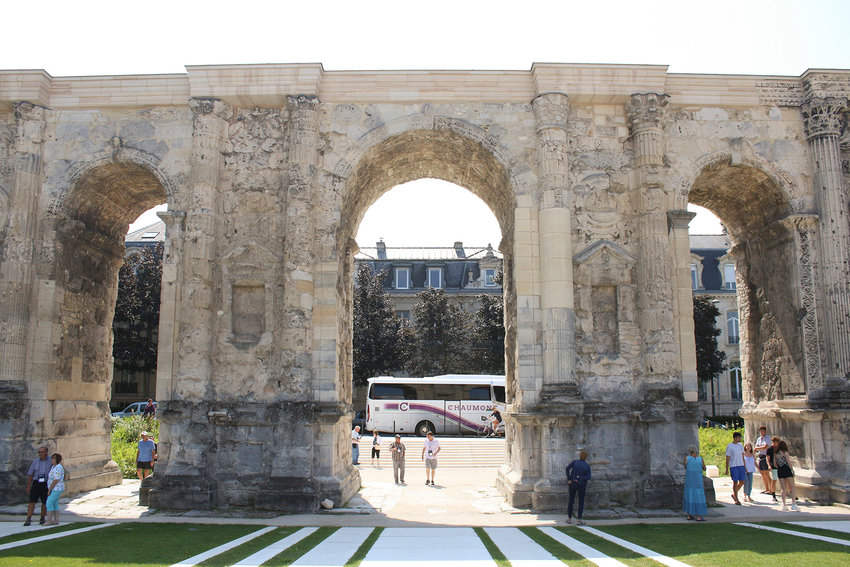 This Roman gate, Le Porte de Mars, was across the street from the restaurant in Reims where we had lunch. It dates back to the third century.
Stephanie Croston 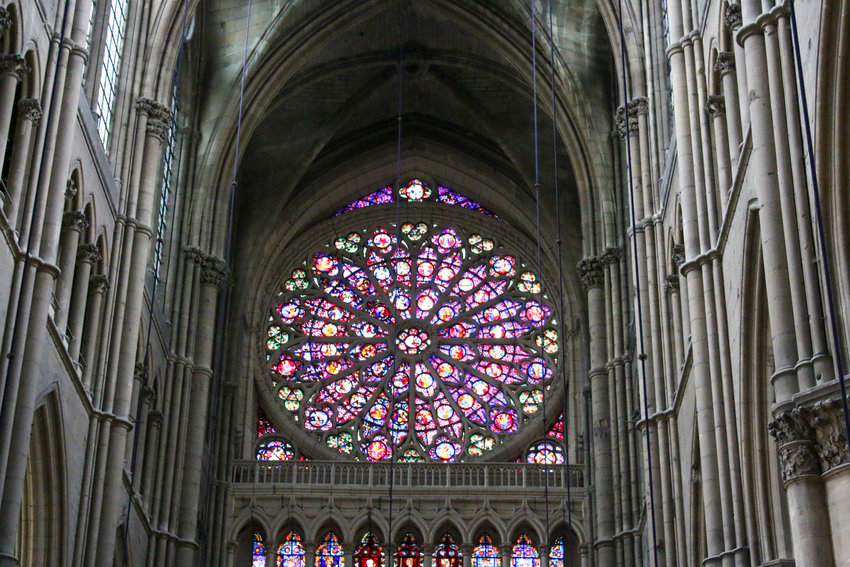 The Grande Rose window on the west end of the Reims Cathedral is one of the most famous rose windows in the world.
Stephanie Croston 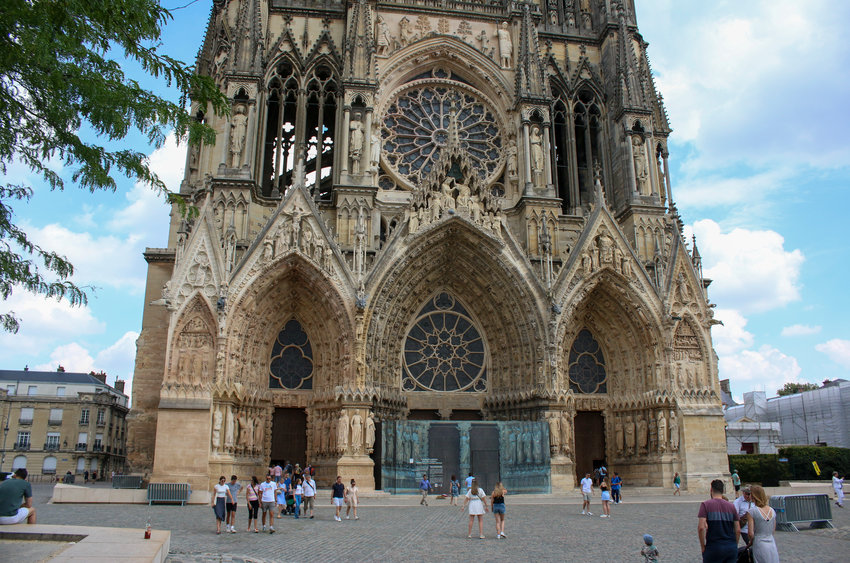 The Cathedral at Reims is a spectacular structure and is known as the cathedral of angels because of the number of angels included in the decorations.
Stephanie Croston 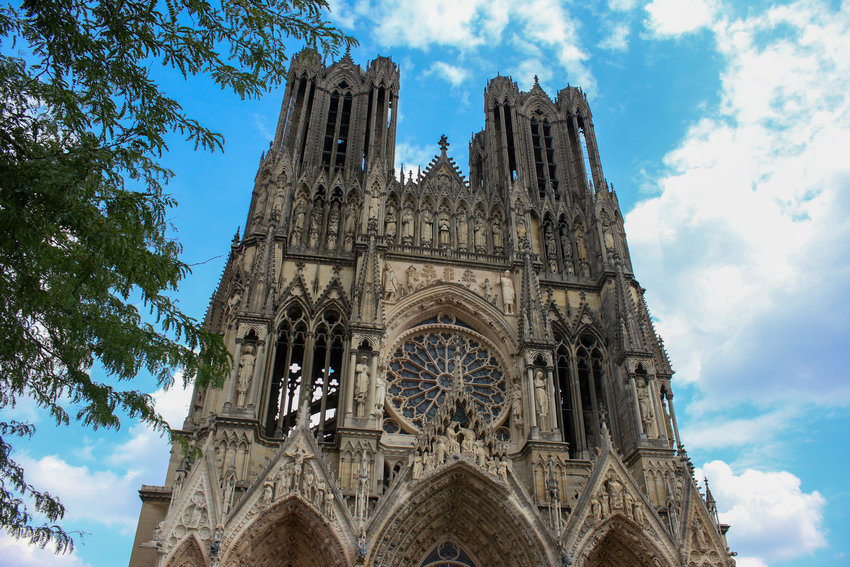 I couldn't get back far enough to get the whole cathedral in one photo.
Stephanie Croston 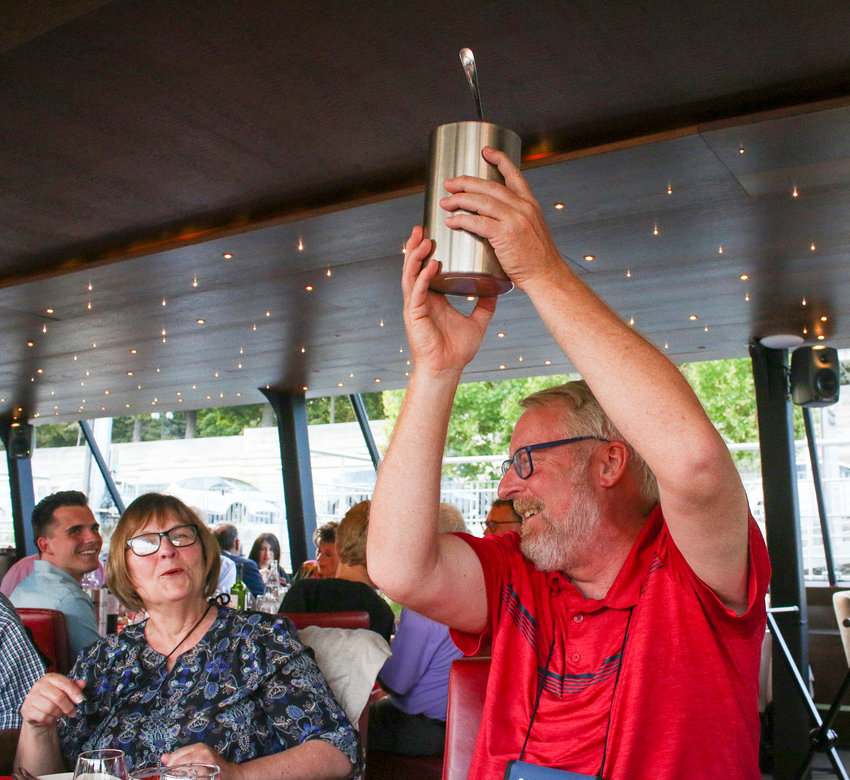 Jerry gets ice! After asking for ice cubes with every bottle of Coke on the trip, Jerry Meyer finally got that and more on our end-of-tour cruise.
Stephanie Croston 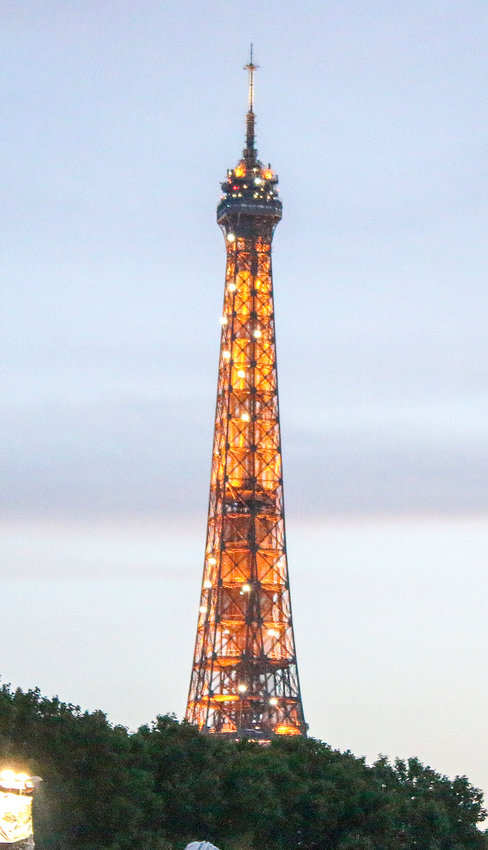 The Eiffel Tower lit up for several minutes with twinkle lights as we cruised along the Seine River July 23.
Stephanie Croston 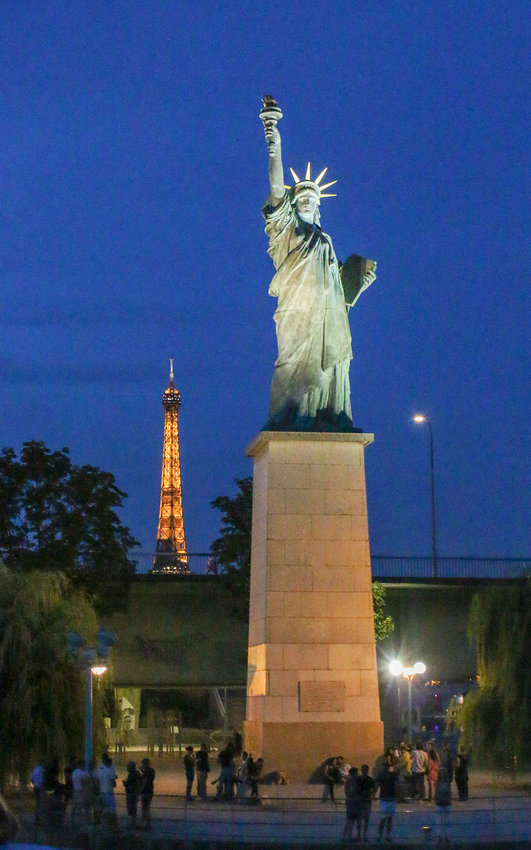 No, this is not a fake photo. A scale model of our Statue of LIberty stands on Swan Island in the Seine. Remember, the same guy did both Lady Liberty and the Eiffel Tower.
Stephanie Croston 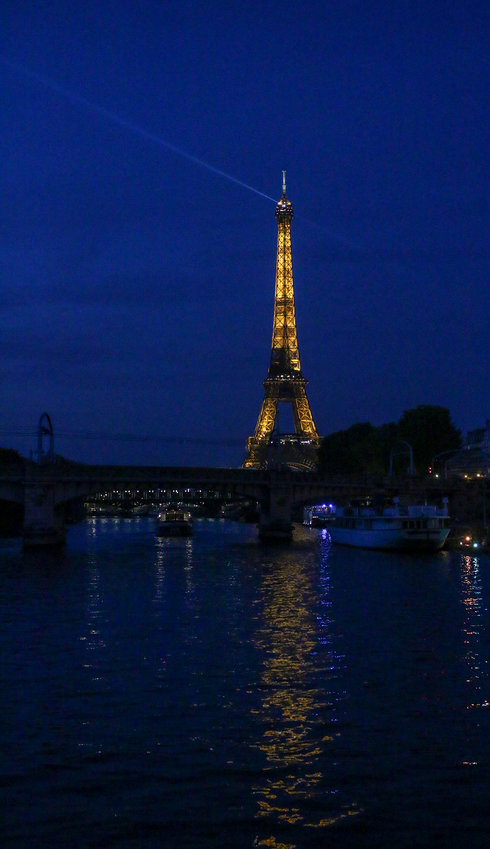 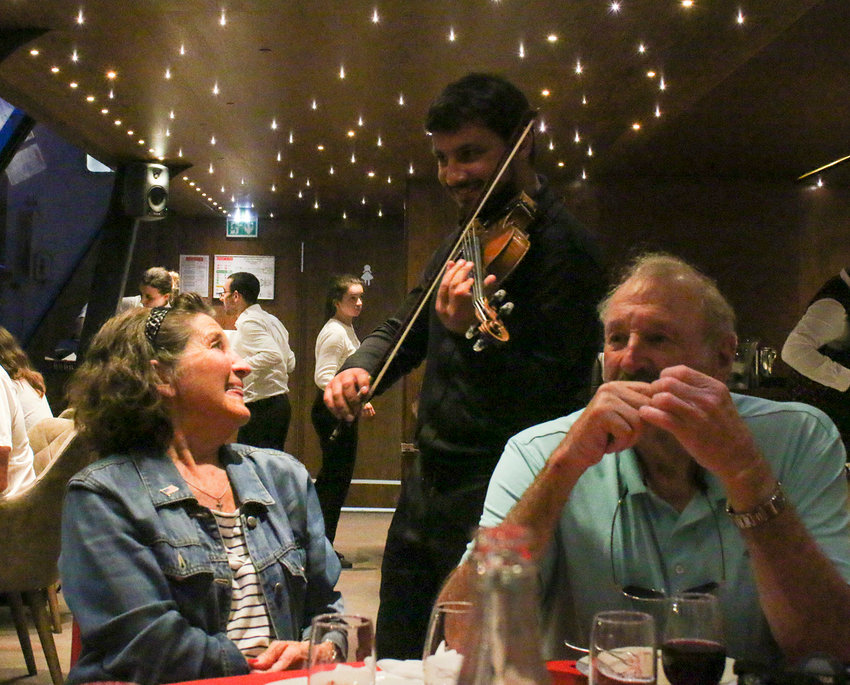 We left Luxembourg this morning and headed to Reims for two stops. One was a museum that houses the room where it happened, as Lin-Manuel Miranda wrote, where officials from Germany, led by Gen. Oberst Jodl, signed the surrender to end World War II in Europe on May 7, 1945. Because Russia was not represented at the table, Josef Stalin insisted on signing everything again the next day, which is the official V-E Day.

The table holds nameplates with the names of the people who sat in each chair. The chairs for Jodl and his associates have their backs to visitors. To see that table, with original maps still adorning the walls and notes for what to look at next, was pretty awesome. There are even two ashtrays for those who smoked. It seemed fitting to see that on the last day of our tour, as well, to put the finishing touches on the Nebraska National Guard’s service in Europe.

The museum also includes uniforms, weapons, pictures and other memorabilia from wartime.

As we headed across town for lunch, the ruins of a Roman gate, La Porte de Mars, appeared. They were right across the street from the restaurant, so of course we all went to look at them. The gate dates from the third century but many of the carvings are still intact. Some have been damaged and repaired, but overall it was pretty impressive.

The Reims Cathedral was our stop after lunch, and wow, was it worth it. We've seen a lot of cathedrals on our trip. Most were damaged in some way during either World War I or World War II, and Reims is no exception. However, it was amazing. That's such an overused word any more, but this building was so solidly built, I'm surprised anything could hurt it. Walking through, looking at the windows and the artwork, again I was blown away by the craftsmanship and the thought of the amount of time it took to put the church and all its related pieces together. From the statues inside and out to the carvings over the door and the stained glass, each cathedral has been a true work of art.

This cathedral is known for two things – the number of angels included in its statuary and artwork and its Grande Rose window. One of the angels was actually injured in World War II. Someone shot it through the wings. The original angel is now in a museum, with its body double standing in.

After lunch, we set off on our final leg of the tour, headed to Paris. We got to the hotel (a Holiday Inn, of all things) in time to dress for dinner, which was a cruise on the River Seine. The dinner was good, but the views were better. We went past the Eiffel Tower, which was lit up for the night. It even has a twinkle light (for lack of a better term) show at 10 p.m., which we saw from the upper deck of the boat. When we made the turn on the river, lo and behold, who should appear but the Statue of Liberty? No joke! A scale model of Lady Liberty stands on Swan Island and you can see the Eiffel Tower behind her. It makes for an awesome picture, that’s for sure.

And just like that, the tour is over. It was a fast 10 days, but it was definitely worth the time.