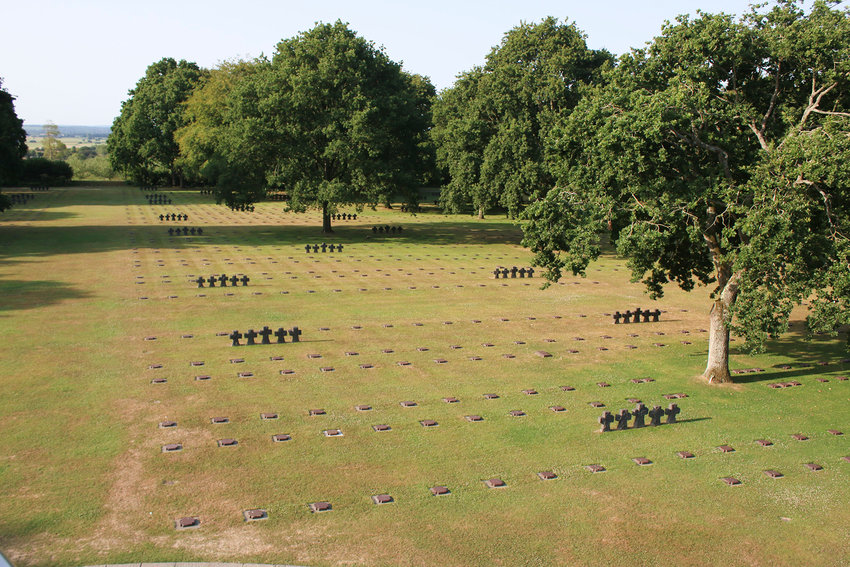 La Cambe is a German cemetery in France.
Stephanie Croston 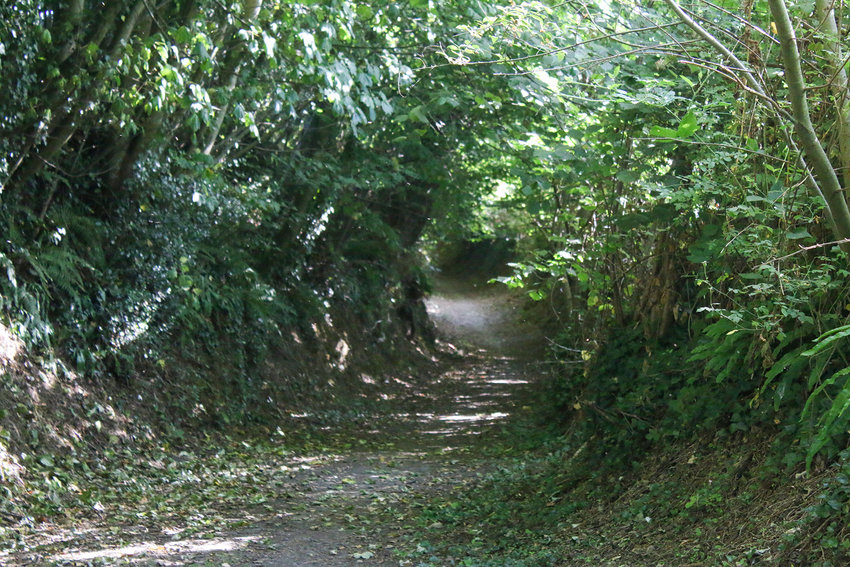 Hedgerow country was the most difficult for Allied troops to get through.
Stephanie Croston 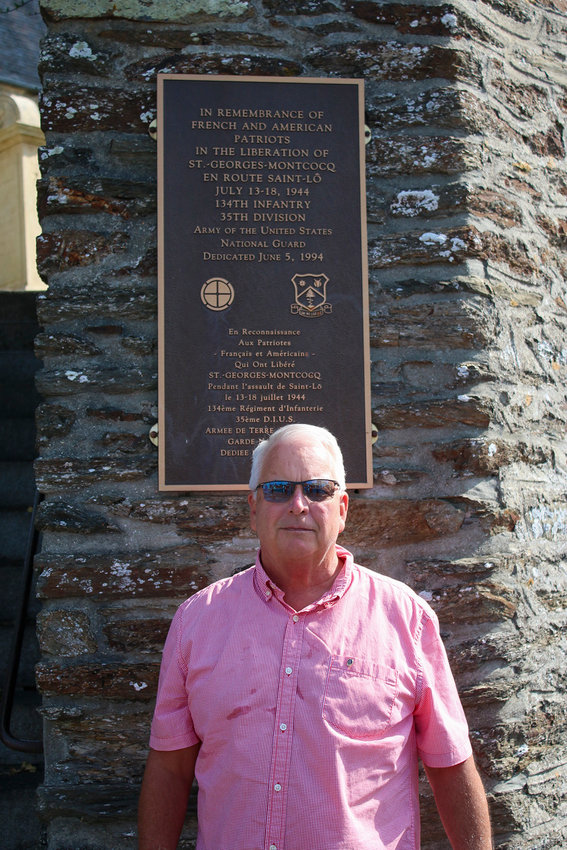 Alan Baldwin stands in front of a plaque honoring the 135th and 29th divisions.
Stephanie Croston 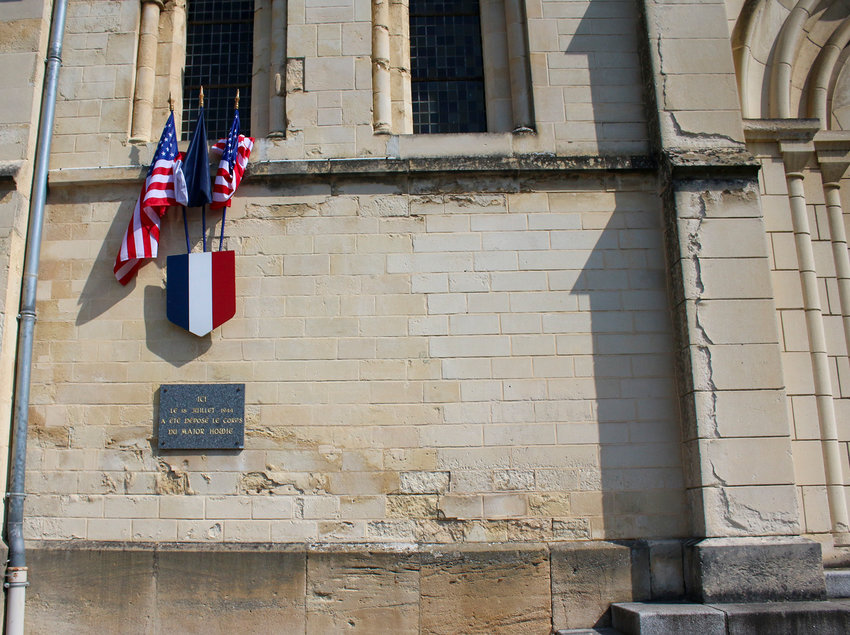 The flags mark the spot where Major Thomas Howie's body was laid on the rubble of L'eglise Sainte-Croix in St. Lo. You can also see the line where the destruction began and ended.
Stephanie Croston 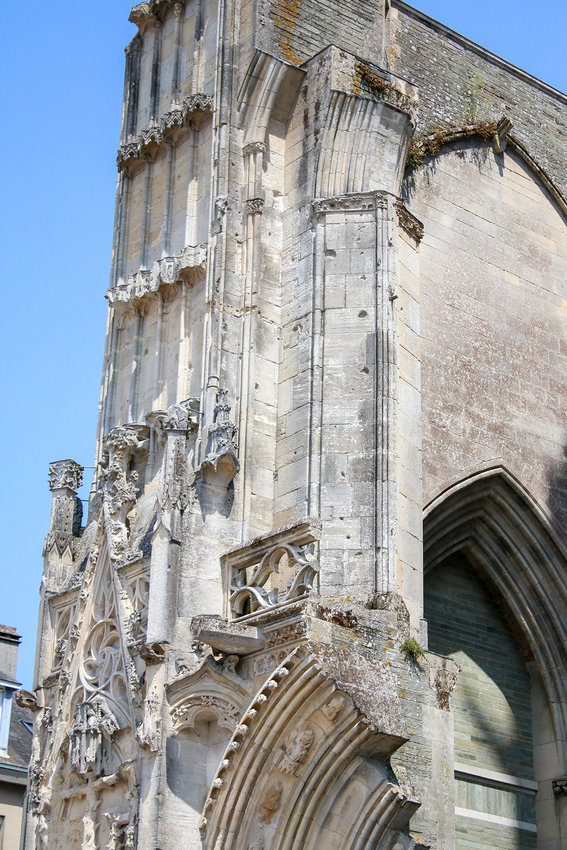 L'eglise Sainte-Croix used to have two towers. One was destroyed during World War II - you can see where it sheared off at the top of the arch.
Stephanie Croston 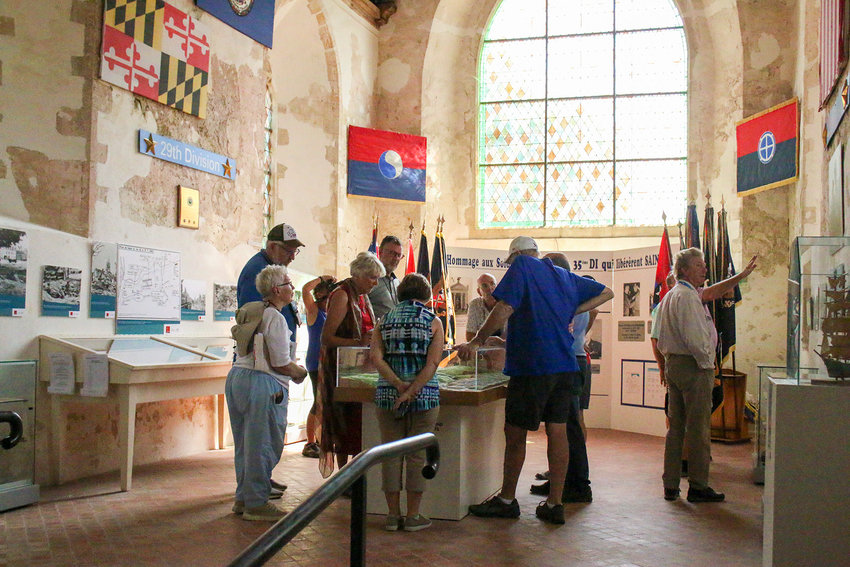 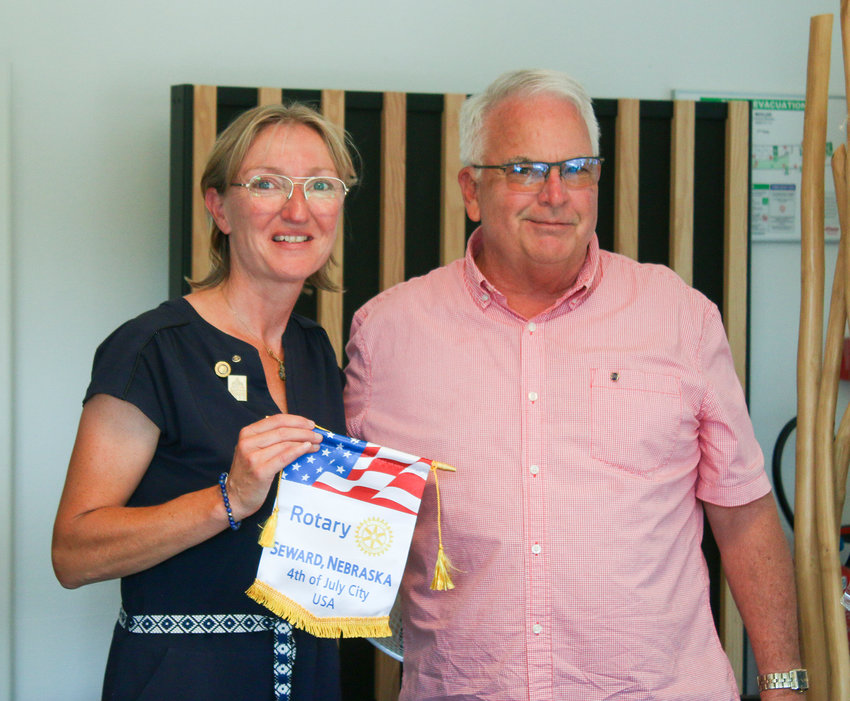 Seward and St. Lo are Rotary sister cities. Representatives from both clubs, including Alan Baldwin of Seward, exchanged banners and gifts.
Stephanie Croston

The Liberation Day ceremony at St. Lo included a color guard (half are shown here), speakers and two World War II veterans, one age 97 and the other 102. Both were in the 29th Division.
Stephanie Croston 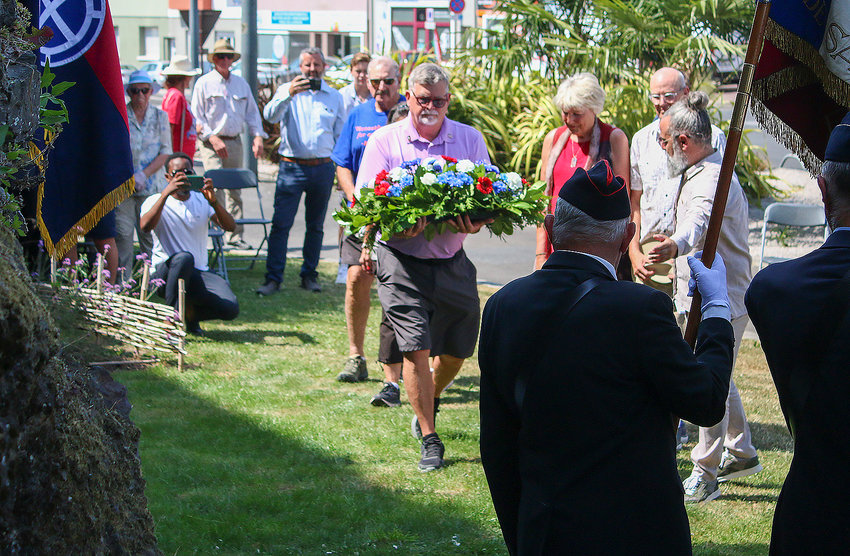 Dave Nore prepares to lay a wreath during Liberation Day ceremonies July 18 in St. Lo. He was assisted by Tom and Jeannie Gee and Jeff and Trudy Hines.
Stephanie Croston 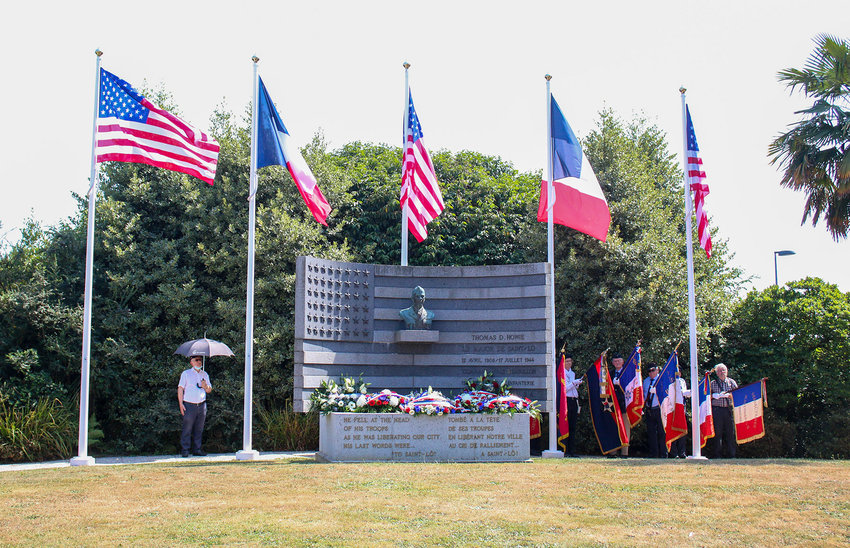 Today was just hot – it hit 105 in St. Lo, which was where we were for most of the day. I should be used to it. After all, I’m from Nebraska.

We started out with a stop at La Cambe, a German cemetery. It’s different from the American cemeteries with groups of five black Germanic crosses scattered among the square flat grave markers. In the middle is a mound topped by a black statue of a man and a woman with plaques listing names mounted around the bottom; I was told that’s where the unidentified German soldiers are buried. La Cambe holds 21,222 identified soldiers and 23,000 names.

We met Geoffrey, who is originally from Brisbane, Australia, but has lived in France for the last 30 years. Geoffrey took us into hedgerow country in Normandy. A hedgerow is a living fence, he said, that includes trees, shrubs and often hawthorne because of its thorns. The hedgerows were used as fences and separated the small fields. The trees meet overhead to form a kind of tunnel that’s used as a thoroughfare. Some are used to move livestock from field to field - even today. Others are wider and paved and used for pedestrians.

We crossed Hill 122 as we walked. It doesn’t look like much today, just a small farm with cows, and I’m sure it wasn’t much in 1944. But it was an important objective in the push toward St. Lo.

We stopped at the church in the town. Jerry told us a sniper nest was located in the steeple, and the snipers were picking off the Allied troops as they approached. The Allies took care of the problem and allowed the soldiers to continue on.

We had lunch in St. Lo and then stopped at several sites around town before participating in two of the town’s three Liberation Day ceremonies. First stop was Le Eglise Sainte-Croix where Major Thomas Howie’s body was brought after he was killed in action. He was with the 29th Division and was simply known as “the major of St. Lo” because the media didn’t want to identify him. The church was in ruins when the 29th entered, but they covered Howie’s body with a flag and placed it on the rubble.

Of course, we also went into the church to look around. Damage is still visible on the facade of L’eglise Notre-Dame de Saint-Lo. One of its two towers was completely destroyed, but you could see where it had been. It’s a huge cathedral, probably the biggest we’ve been in so far. But one of the stained glass windows had a tractor in the design. I don’t think that dates from medieval times. :)

Our next stop was Memorial de la Madeleine, a small chapel that’s been converted to a museum. It was originally a leper colony and then became a barn for about 200 years, Michael (the curator) told us. St. Lo bought it in the late 1980s and set about restoring it, with the goal of being done by 1995. It wasn’t quite finished for the 50th anniversary celebrations. There’s a ton of information there about the 35th (Nebraska) and 29th (Virginia).

Lunch was with some of the St. Lo Rotary members, including a World War II veteran. That was very cool. I didn’t know he was there until he was introduced after we ate.

Our group participated in a Liberation Day ceremony at the base of the St. Lo city wall honoring the 35th. Dave Nore, Tom and Jeanne Gee and Jeff and Trudy Hines were the wreath layers. We went up the street for another ceremony honoring the 29th. Also attending were two World War II veterans, ages 97 and 102 (and still spry!), both from the 29th. As we continue to lose our World War II veterans, it’s important to honor them every chance we get, I think.

Both were simple ceremonies. The emcee made some remarks, then wreaths were laid and the national anthems of the United States and France were sung.