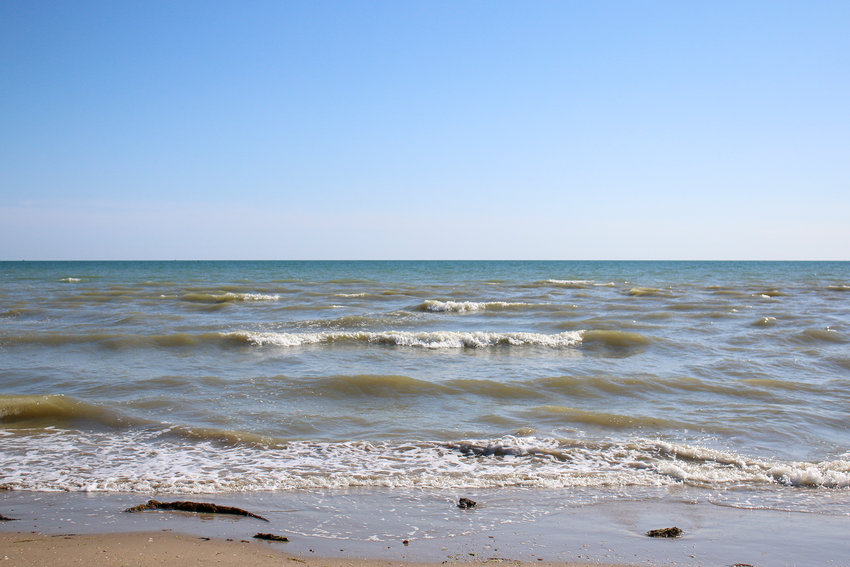 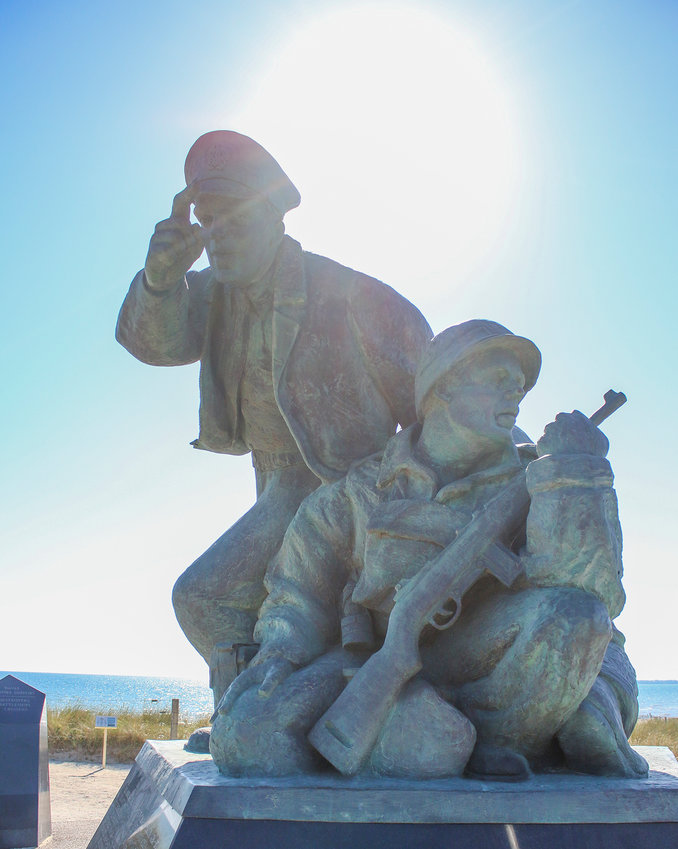 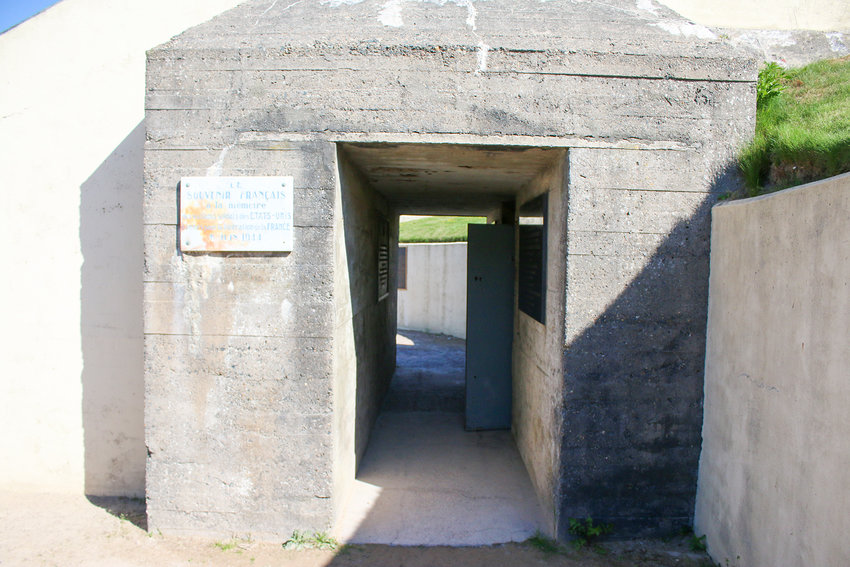 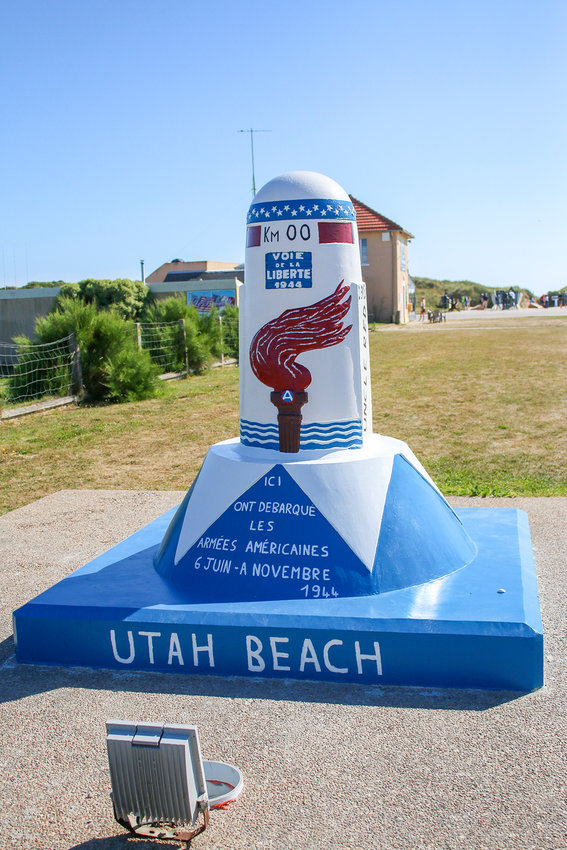 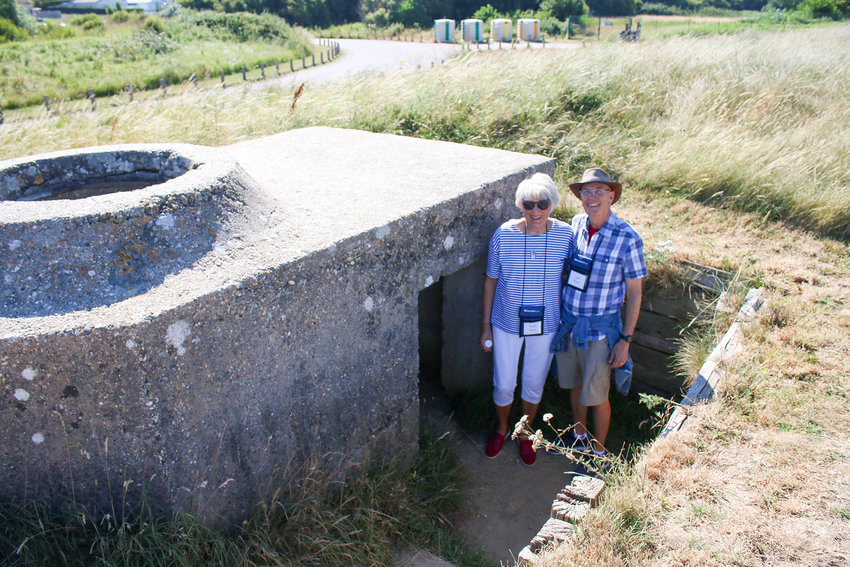 Jeff and Trudy Hines stand next to a gun emplacement off Utah Beach. Yes, that is the doorway - it's not very tall.
Stephanie Croston 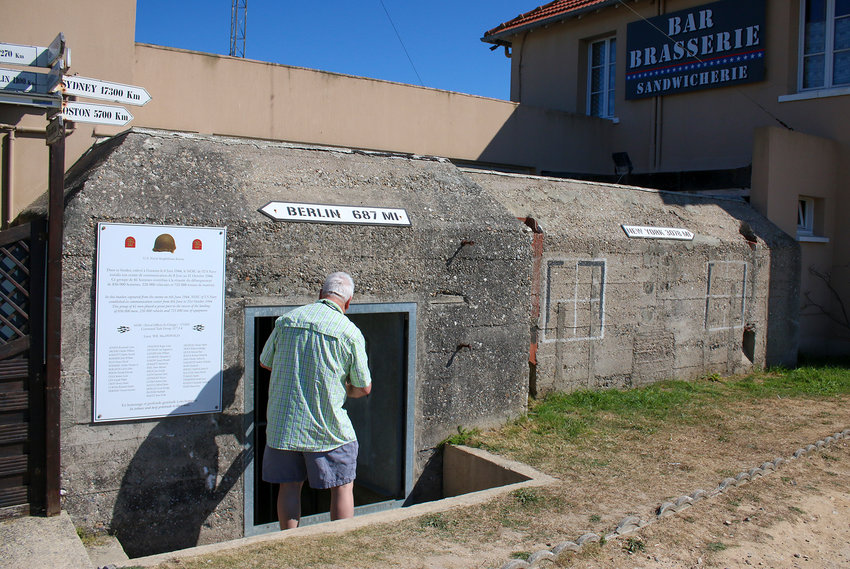 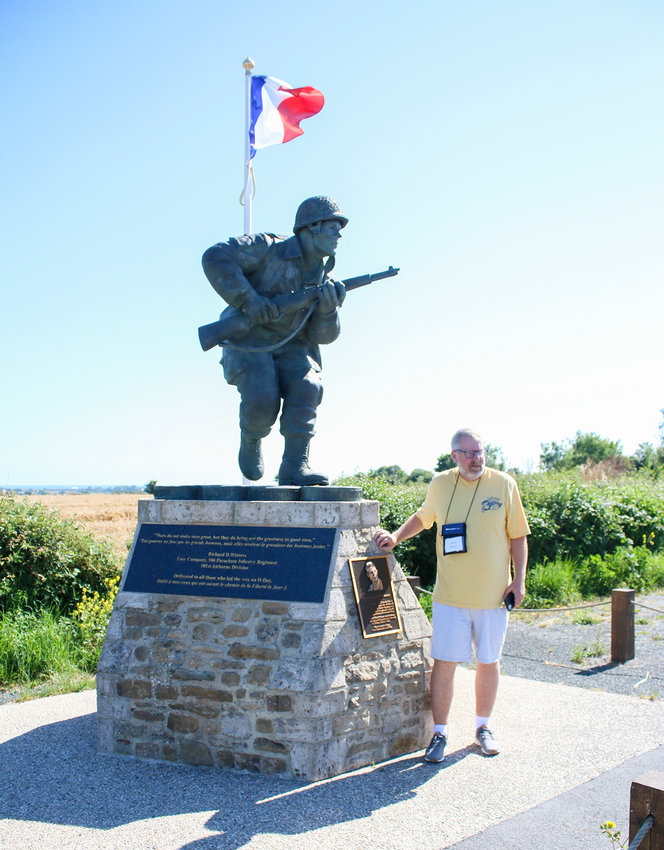 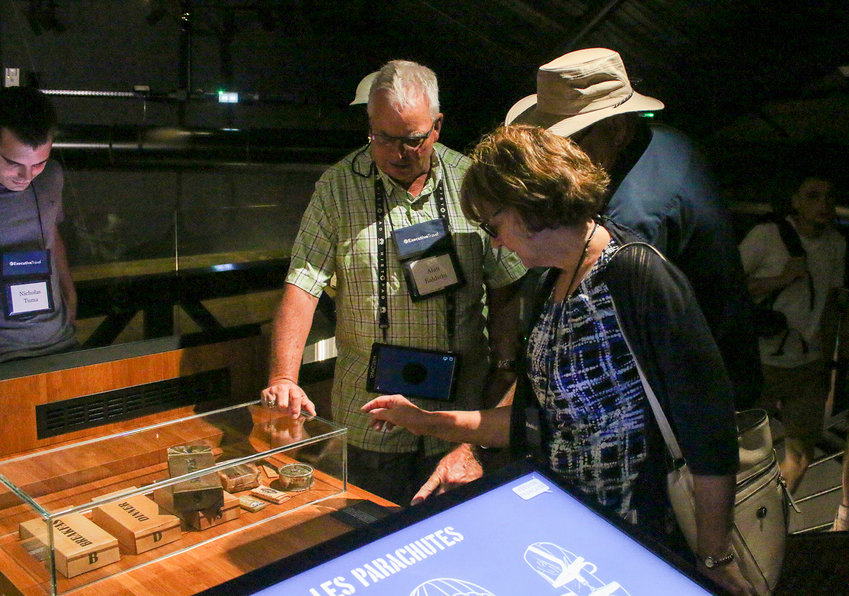 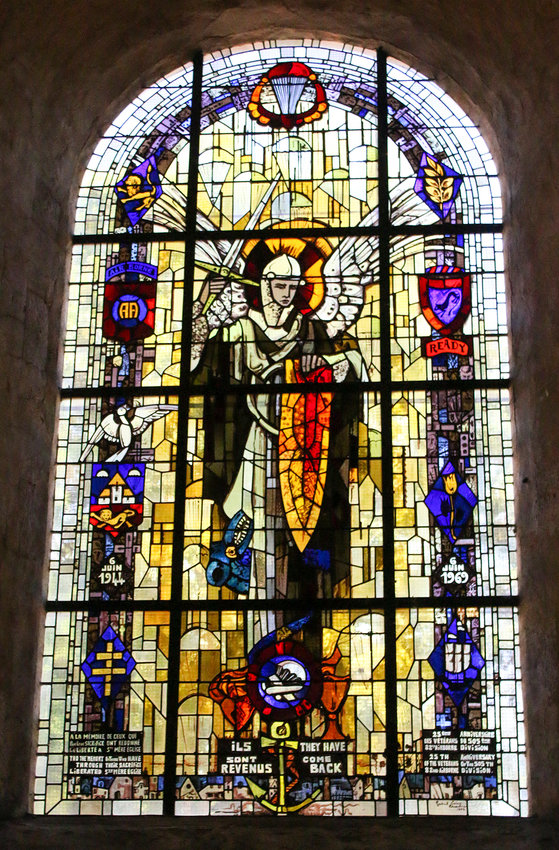 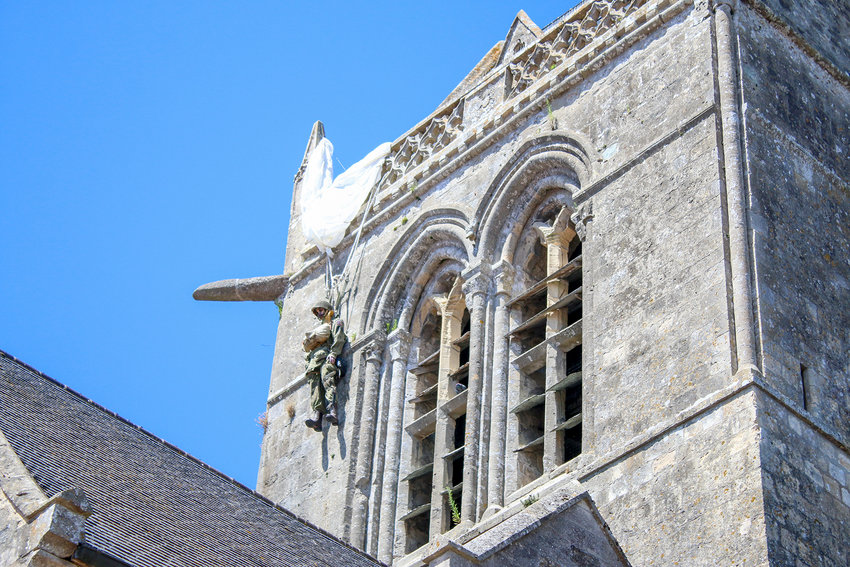 John Steele's parachute caught on the roof of the church in Ste.-Mere-Eglise. He pretended to be dead so the Germans wouldn't shoot him.
Stephanie Croston 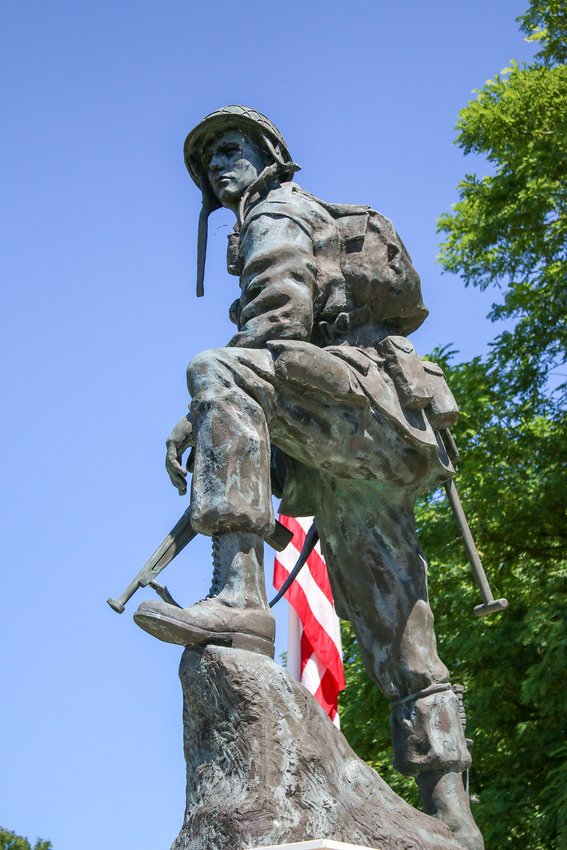 "Iron Mike" symbolizes the squad leaders who encouraged their troops to "follow me" into battle.
Stephanie Croston 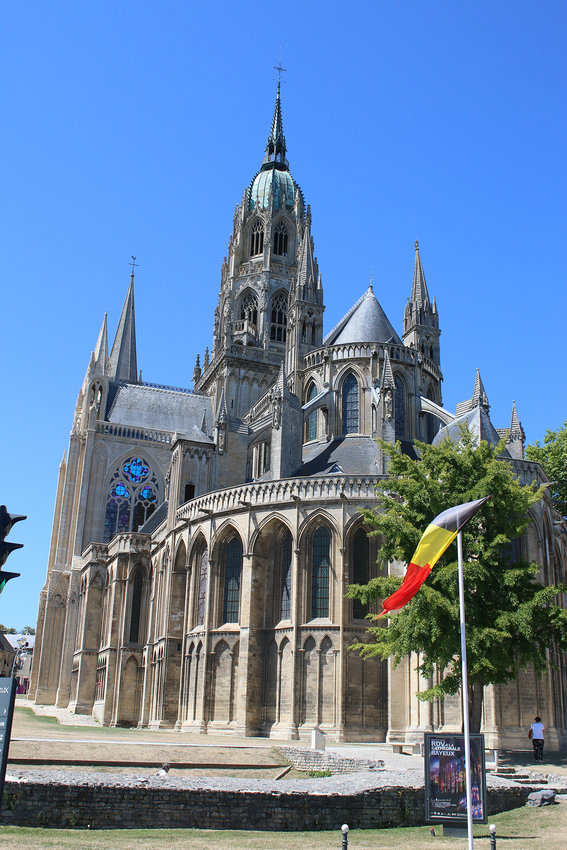 The Bayeux Cathedral is a great example of Gothic architecture.
Stephanie Croston 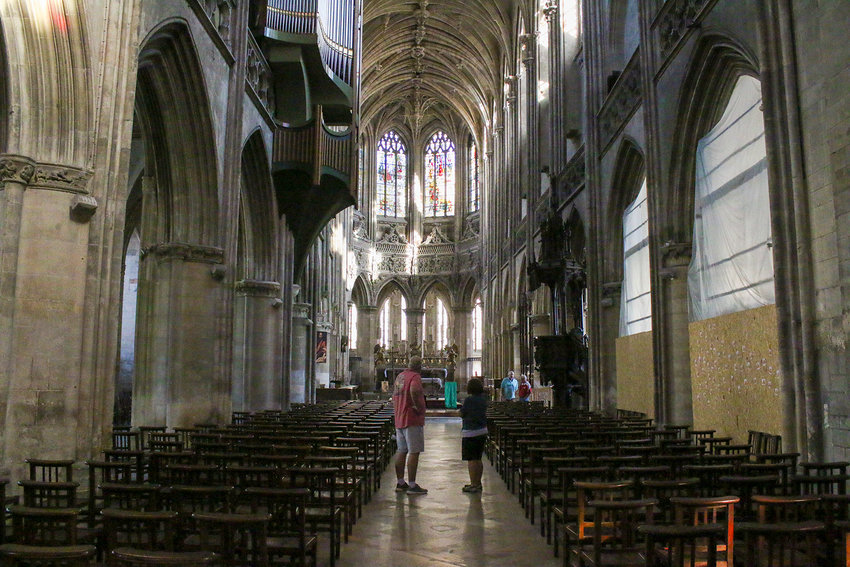 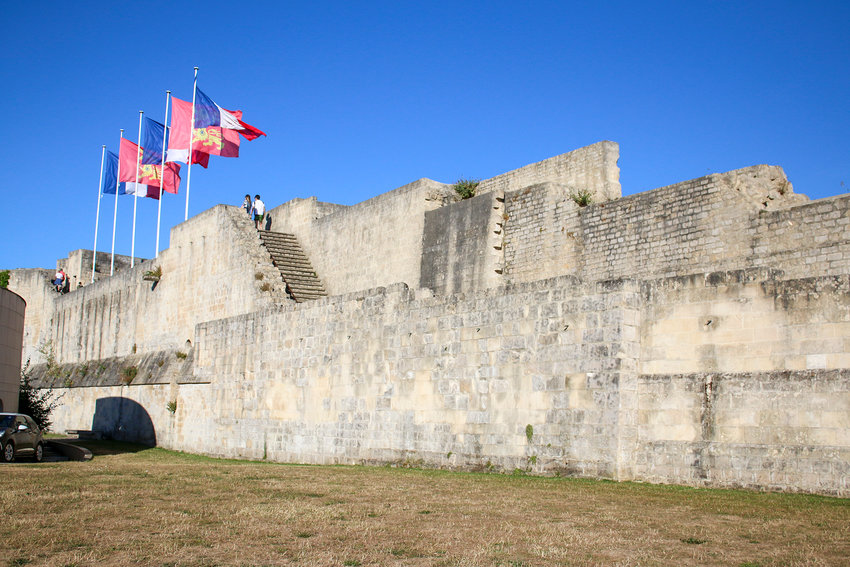 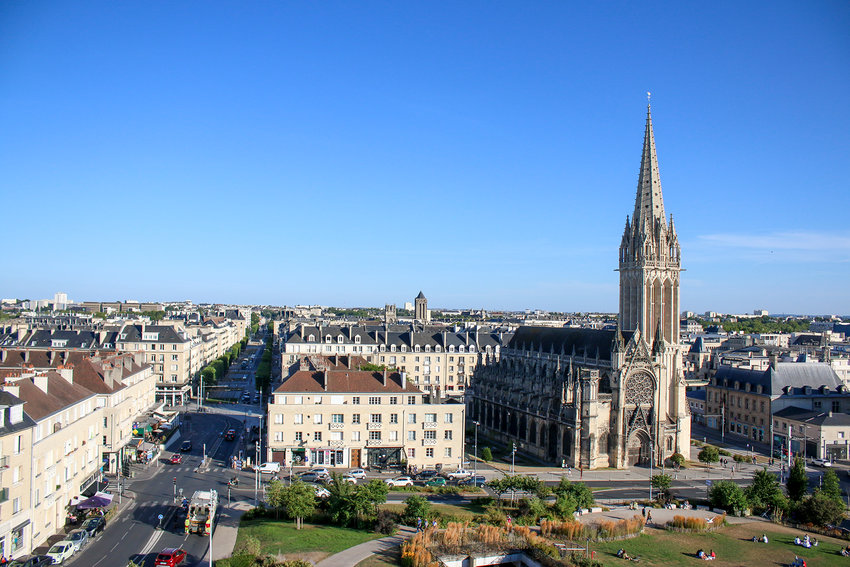 We’re not back to the hotel yet (just leaving Bayeux) and it’s been a full day already.

We started out this morning at Utah Beach. Utah was one of the beaches used for the D-Day invasion. We were able to collect some sand that we can take home with us. It was a beautiful morning - the sun was up and a cool breeze blowing across the English Channel. Waves rolled onto the sand, just like every beach you’ve ever stepped on. It’s not hard to picture the water filled with warships, sending thousands of young men onto the sands of France. I was trying to imagine the sounds, though - the yelled commands for the soldiers coming ashore and the screams of the wounded would have been drowned out by the crashes of mortars and guns and the engines of ships and airplanes. It had to have been utter chaos on June 6, 1944. And it wasn’t even the busiest of the five invasion sites.

The beach area includes the bunker where Theodore Roosevelt Jr. is said to have said: “We'll start the war from right here!” There’s a German bunker you can walk through. A plane flew overhead while I was in it, adding a little to the sounds in my imagination. I found my way to gun emplacement (I think that’s what it was) and ducked in. And I’m not kidding when I say ducked. I’m only 5-6, but this doorway couldn’t have been more than about 3 and a half feet tall. No really tall people allowed! You wouldn’t just bump your head - you’d bump your hips!

Several monuments have been erected commemorating the different regiments and soldiers who fought there. The Higgins boat is the entry point to the beach and museum (which we did not go through). Andrew Jackson Higgins was originally from Columbus and developed a small landing craft that allowed the soldiers to get to the shore more efficiently. Gen. Dwight Eisenhower said Higgins won the war for the Allies with his boats. They’re not very big - according to specs they’ll hold about 30 soldiers with all their gear. I’m not sure how.

We stopped at the Dick Winters Memorial statue. He’s the guy from Band of Brothers who led EZ Company. We also saw a foxhole (although I think it’s been filled in a lot) from which Gen. James Gavin directed the continuation of the invasion.

Moving on, we had lunch in Ste.-Mere-Eglise. First, though, we stopped at the Airborne Museum and saw the Waco Glider, a flimsy glider that transported hundreds of troops into France. The gliders were towed behind other aircraft and let loose to glide into France. The Waco was built of plywood but the nose was canvas. The seats were called “coffin seats” because they were made of the same wood used to make coffins.

I also walked through the building that housed a C47 from which paratroopers jumped - or fell, more than likely. They left the plane at 600 feet, which is much closer to earth than paratroopers usually jump. It included examples of parachutes and a harness you could actually try on. At least, another group by us was trying it on. Hopefully they didn’t get in trouble.

I had lunch with Sue and Jerry Stahr, and we found food at a patisserie in Bayeux. While I just had a ham and cheese sandwich (boring, I know, but when it comes to food I’m not terribly adventurous), they got dessert - an eclair and a tart. They said both were absolutely delicious.

The other thing about SME is the church. On D-Day, John Steele was parachuting into the area and his parachute got caught on the church steeple. A replica still hangs on the roof so tourists like us can see it. Steele was knocked unconscious and when he came to, he played dead so the Germans wouldn’t shoot him. Many paratroopers got caught in trees and the Germans shot them. Many more drowned in shallow water because all their gear weighed them down and they couldn’t get clear of their chutes.

In the church, one of the stained glass windows honors the paratroopers. Very cool!

The statue of Iron Mike was the next stop. Iron Mike was usually the leader of a squad who was the first to move. He was the one who encouraged everyone to “follow me” into battle. A frieze of the battlefield was included on the hill by the statue, and that was interesting to look at.

Off we went to Bayeux, a town that escaped extensive shelling in World War II. One of its claims to fame is its cathedral, which is Gothic to the max. I walked up there with Lori and Wayne Milton. It was incredible. The sheer ornate-ness of the building is overwhelming. Gothic architecture is quite decorative - lots of carving and curls and decoration. And then there are the beautiful stained glass windows. The sun was shining through the ones on the southwest, so they were even more incredible.

While I’m not Catholic, I can still appreciate the work and dedication that went into the creation of those windows and the elaborately carved furniture in the cathedral.

Back at the hotel now to finish things up for today.

Our other option in Bayeux was the Bayeux Tapestry which depicts the story of William the Conqueror. He was, of course, the Norman king who fought at the legendary Battle of Hastings in 1066 and later was crowned king of England. Our tour guide Birgitta recommended either the cathedral or the tapestry - some of us decided to try to be overachievers and do both. So, after wandering around the cathedral, off I went to see this 70-meter long piece of art.

According to the book I got about this tapestry, it’s not a tapestry at all because it’s not woven. Instead, it’s a ginormous piece of needlework. I can’t imagine how long it took to make it. It’s also not really French. It was made in England by English stitchers.

It tells the story of Harold, Edward and William. The book says it’s not really the history of the Battle of Hastings because that would be a secular theme and inappropriate for the church where the tapestry was originally hung. Instead, it’s a religious illustration of “perjury following an oath taken over relics inevitably drew upon the guilty one and his kinsmen, the direst of consequences.”

So, I flew through the display. I didn’t stop to look closely at many panes, mainly because the people next to the glass were listening intently to the audio narration (which I did not do in the interest of time). But what I saw showed the time and care taken on each of the illustrations.

We climbed back on the bus and returned to Caen. Our hotel, Mercure Hotel, is across the street from the small marina. A rather large group of us (about two-thirds of our crew) headed out for supper early by French standards. We ate at a small cafe that served kebabs, paninis, burgers and tacos. Interesting combination, that.

A handful of us decided to go to the fort and Eglise Sainte-Pierre to see what we could see. The cathedral was impressive, as you would expect. Gothic architecture was the order of the day. We actually had to leave before we were really done looking because they were locking up for the night. I thought the church never closed. :)

The fort is from the time of William the Conqueror and was his residence. We couldn’t go inside, but we climbed to the top of the towers and looked over the walls down onto Caen. The views were pretty cool, as were the defensive details – arrow slits and a keyhole - possibly for boiling oil? The walls were six feet thick - imagine trying to knock that down with anything smaller than a missile. No wonder medieval lords thought their homes were impregnable.