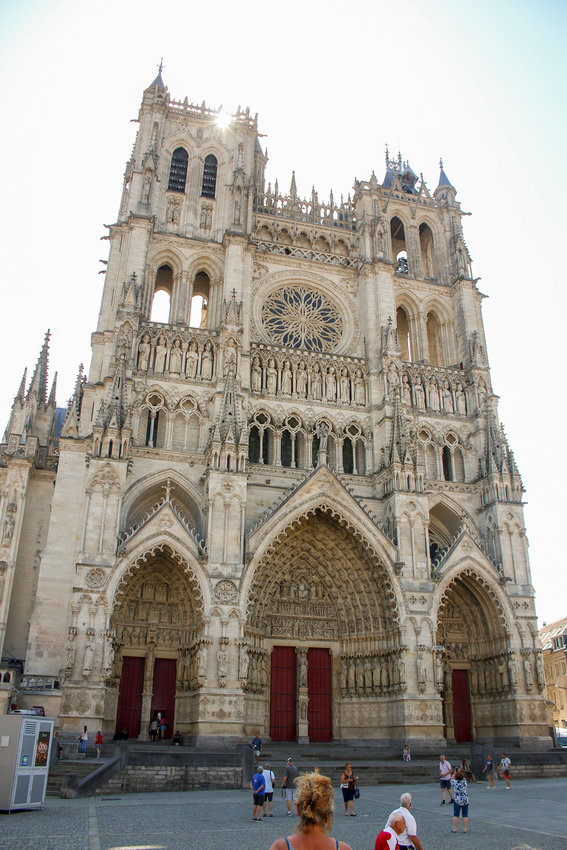 Amiens Cathedral is the largest cathedral in France. The Notre Dame Cathedral in Paris could fit inside it.
Stephanie Croston 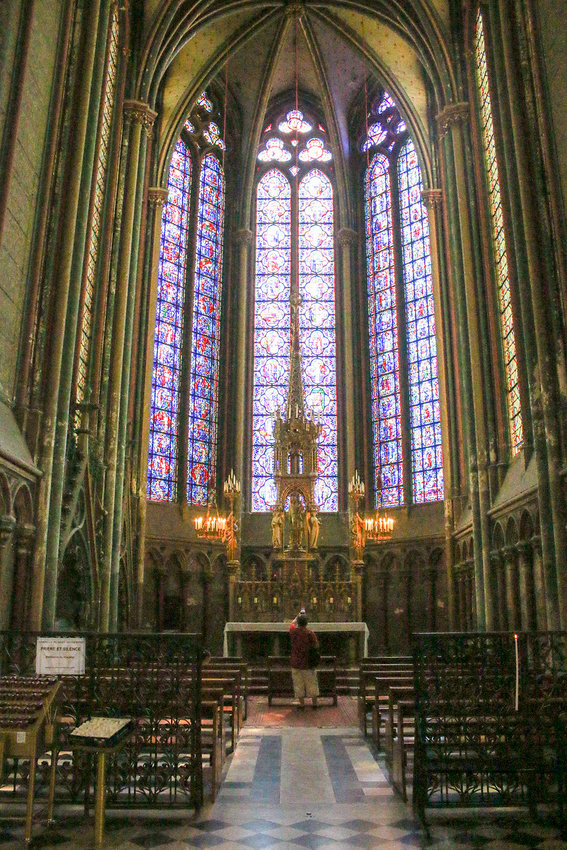 You can see the scale of Amiens Cathedral based on the person standing in front of the altar.
Stephanie Croston 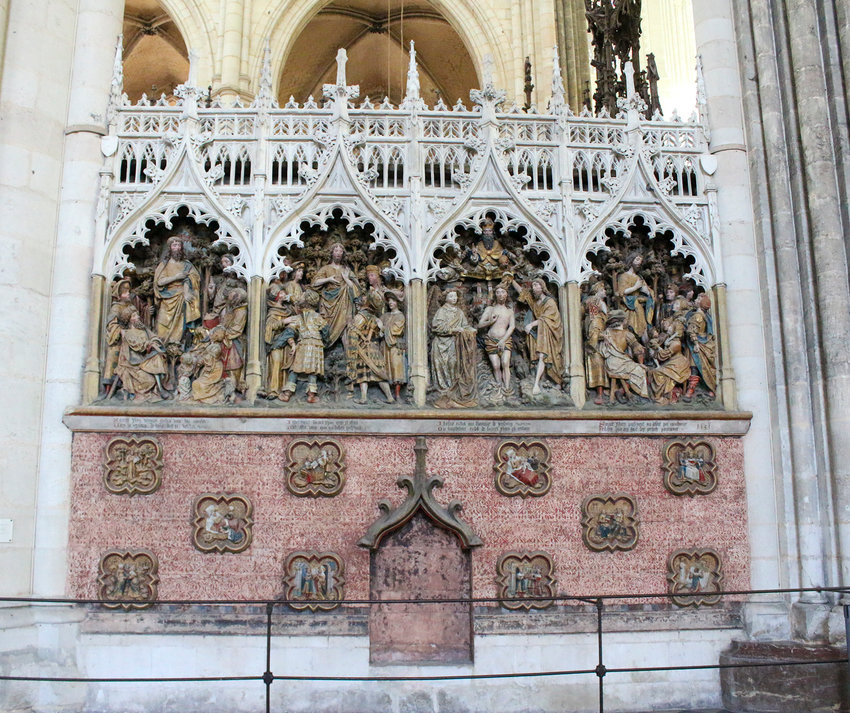 There were at least four panels with detailed carvings like this one inside Amiens.
Stephanie Croston 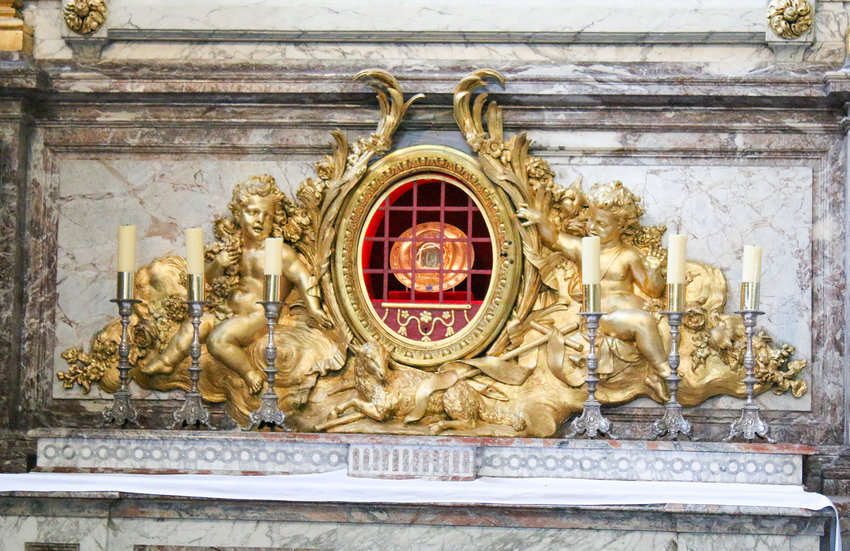 The cathedral is also home to this skull, thought to be that of John the Baptist. There really is a skull behind the red bars.
Stephanie Croston 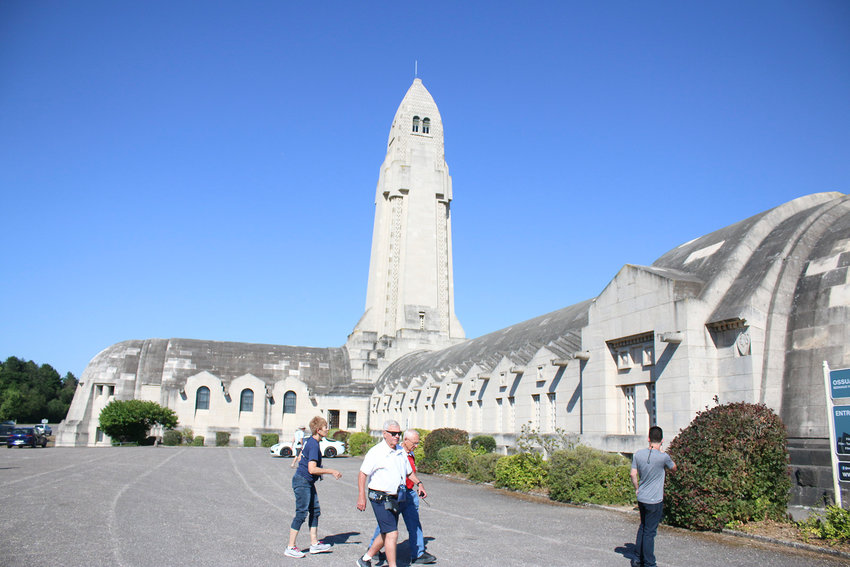 We stopped at the Ossuary of Verdun, a memorial to those killed in the Battle of Verdun in World War I.
Stephanie Croston 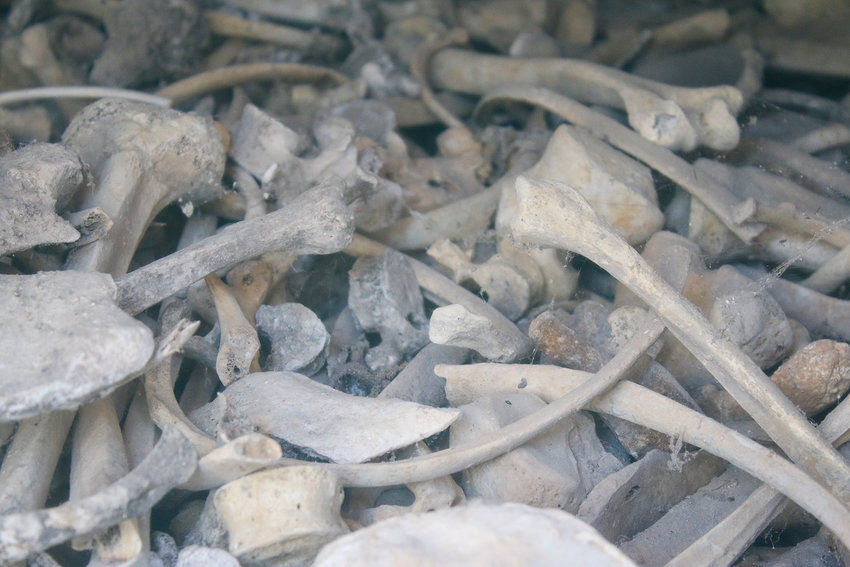 An ossuary is a place where the bones of the dead are placed. This ossuary at Verdun has thousands of bones collected from the battlefield.
Stephanie Croston 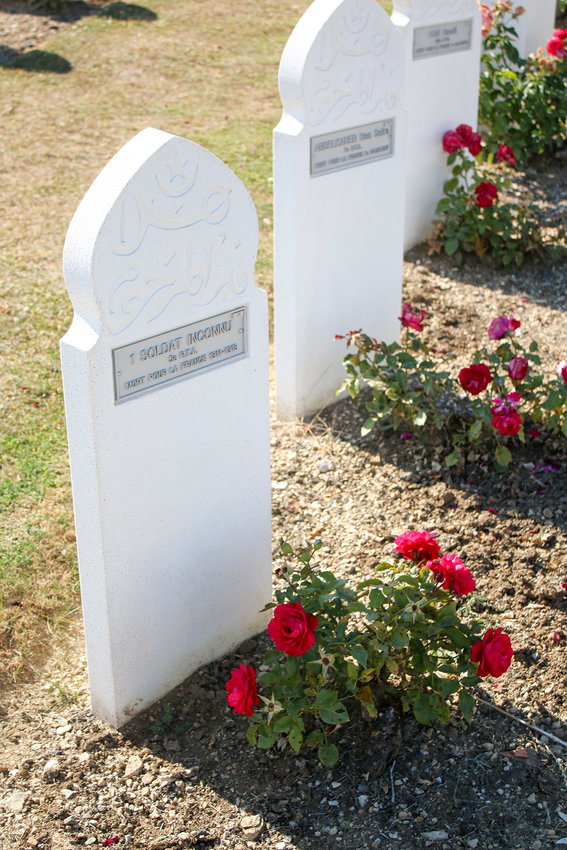 The Muslim soldiers' grave markers are not crosses because a cross doesn't match their beliefs. All the gravestones in the section face east.
Stephanie Croston 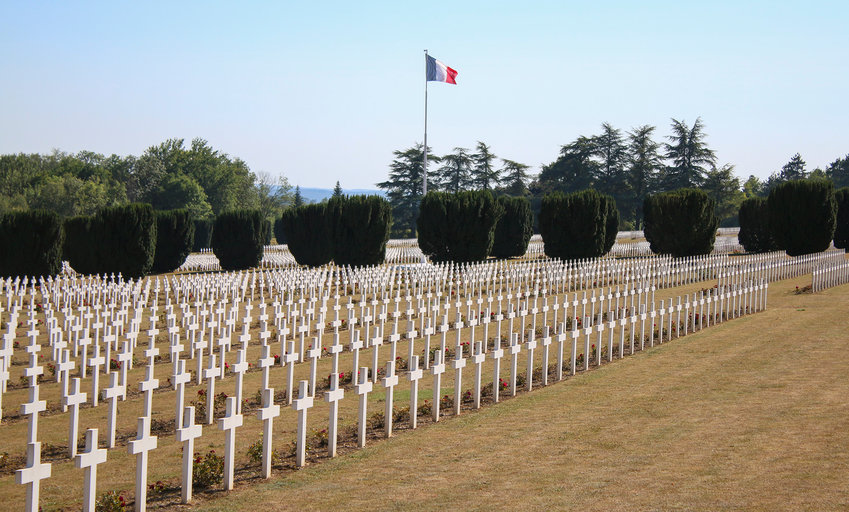 The cemetery includes more than 16,000 graves. The crosses are for the Protestant and Catholic soldiers. One section is set aside for the Muslim soldiers who fell.
Stephanie Croston
Previous Next
Posted Wednesday, July 20, 2022 2:00 pm
by Stephanie Croston, scroston@sewardindependent.com

We spent most of today in the bus, traveling from Caen to Nancy (pronounced non-SEE as far as I can tell). We did make two amazing stops though.

Our first was in Amiens, where we had lunch. That wasn’t the amazing part, although the lunch was good. We went to the cathedral, the biggest cathedral in France. The volume of this building is 200,000 square meters. It’s 145 meters long. That’s a football field and half. The first stone for this massive edifice was laid in 1220. According to the guide book I got, the majority of the windows are not original. Several wars and other disasters destroyed them. They were removed during World War I, and most were lost in a fire at the artist’s home.

The cathedral is also home to a skull thought to be that of John the Baptist. One set of the carvings in the cathedral depicts scenes from John’s life, including him baptizing Jesus, preaching and being beheaded.

Just walking through the building, looking at the artwork both painted and carved, was overwhelming. The amount of time required for making even a small piece of that by hand had to have been enormous. And it’s not just inside. The outside is covered with carvings, too. And as I said, it’s not a small building. I probably could have spent a couple hours looking at as many details as possible. We didn’t have that much time in Amiens, however, so I had to settle for the minutes available. It was definitely worth the time.

In Amiens we also said goodbye to our driver Walter. He performed some amazing feats with the bus, getting us in and out of tight spaces. We welcomed Mohammed to the driver’s seat.

Back on the bus and back on the road. We had to make an extra stop so Mohammed could stay within the prescribed driving time limits. So instead of just pulling over at a random rest stop, we went to the Ossuaire de Douaumont. What is that? Well, according to the definition, an ossuary is “a container or room in which the bones of dead people are placed.” This particular one was huge.

According to wikipedia, the ossuary cloister is 449 feet long while the tower is 151 feet high. The bones of more than 130,000 unidentified soldiers fill the lower alcoves. In front of the building is the Fleury-devant-Douaumont National Necropolis which contains graves of 16,142 soldiers.

The soldiers were all at the Battle of Verdun, fought from Feb. 12, 1916, to Dec. 19, 1916. Approximately 230,000 men died during that World War I battle in an area less than 7.7 square miles. Sobering. “The battle became known in German as Die Hölle von Verdun (English: The Hell of Verdun), or in French as L'Enfer de Verdun,” wikipedia said.

While the majority of the graves are marked with simple white crosses bearing plaques with names, a section contains soldiers of the Muslim faith. Their markers are wider and rounded at the top, but they also bear plaques with names. They all face east, as well, so they’re canted compared to the crosses.

Every grave, whatever the religion, is topped by a rose bush. They must be absolutely stunning when they’re all in bloom.

When we got to Nancy, we headed to our hotel - the Grand Hotel de la Reine on the Place Stanislas. I didn’t know what to expect, but I wasn’t prepared for this. First of all, I haven’t seen that much gilding in one place. The four gates to the square are trimmed with gold. There are fountains on two corners. The Opéra national de Lorraine is on one side, and the municipal office building (Hotel de Ville) is on the other. It’s a massive square with a statue of Stanislas Leszczynski, the duke of Lorraine, in the center.

We had dinner at the hotel - again fantastic. We started out with something duck, then moved on to chicken and mashed potatoes and finished with a macaroon.

Our luggage was delivered to our rooms, which have doorknobs in the center of the first door and then a second door. Very old-fashioned and something I picture in the homes of very rich people. :)