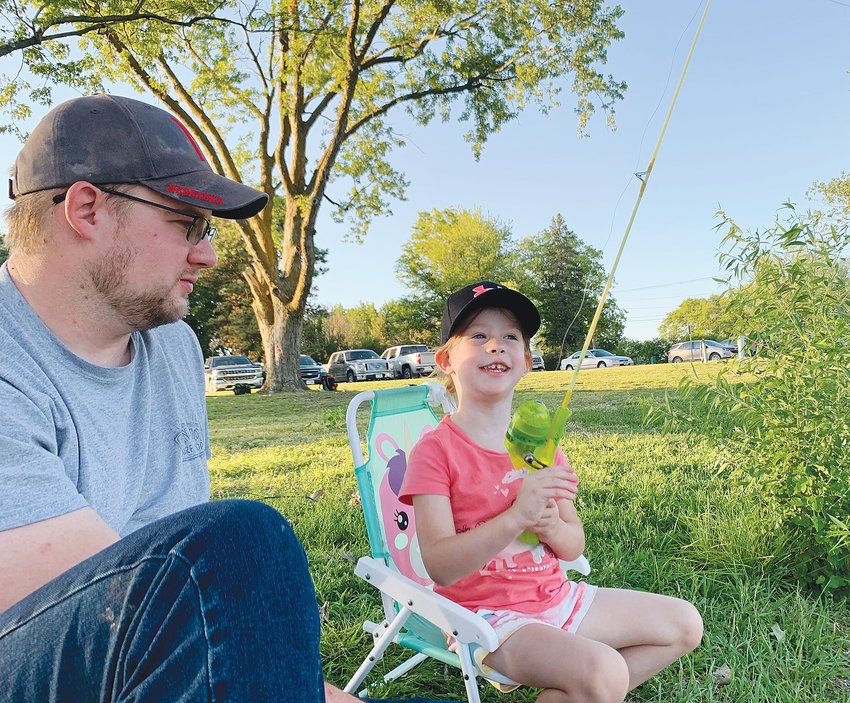 Sam Dierberger, who was in the Staplehurst Livestock 4-H Club as a kid and attended the club’s first fishing contest, now fishes with his daughter, Lauren.
Hanna Christensen/SCI
Posted Wednesday, July 20, 2022 12:00 am
by Hanna Christensen, Seward County Independent

The Staplehurst Livestock 4-H Club hosted its annual fishing contest at Independence Landing at the fairgrounds in Seward July 13.

Ginny Koranda, the organizational leader for Staplehurst Livestock, plays a major role in making the contest happen every year.

She said the event, which always occurs on the second Wednesday in July, was first held more than 20 years ago when Walmart gave the club a grant for free fishing equipment to host a contest.

The club has continued to hold the contest ever since.

“We selected the fishing project just trying to expand a little bit more from ag and trying to do a little bit of natural resources and fisheries and wildlife,” Koranda said.

Registration began at 6 p.m., and fishing ran from 6:30-8 p.m. The club provided free hot dogs, chips and drinks for dinner and nightcrawlers for bait.

The contest was provided at no cost to participants, and everyone, regardless of whether they were in 4-H, was welcome to attend.

In each division, medals were given for “First Fish Caught,” “Biggest Fish Caught” and “Most Fish Caught.” There was also a “Most Unusual Catch” medal given to one person overall.

Saylor Wood won the medal for Biggest Fish Caught in the Junior division with a 15-inch bass.

Wood said although she doesn’t like to be patient, she enjoys catching fish.

Her mother, Jen Wood, said the experience was fun for everyone.

“As a parent, I just love to watch my kids fish,” she said.

After the awards ceremony, the club held a drawing for fishing supplies. Everything was paid for by fundraising done by the Staplehurst Livestock 4-H Club throughout the year.

“It’s a lot of fun to see all the families show up with their kids and their friends within the families too and just see them fish,” Koranda said. “When the first one catches a fish, you can just hear it across the pond, and everybody gets excited.”

Koranda said one of the main goals of the event was to promote 4-H and all the opportunities it offers for kids to do something special with their families.

“We are a family oriented club. Besides us telling them that we do a lot of community service, we want the families to be involved, too,” she said. “We have quite a few grandparents that are still helping even though their grandkids have aged out of Staplehurst Livestock.”

Beau Cook of the Clover Kids division enjoyed spending time with his family at the contest. He caught a nine-inch bass and a turtle, and he said although fishing can be difficult, it is also a lot of fun.

Beau’s father, Rob Cook, said he enjoyed bringing his sons to the event and watching them fish together. He said the best part of the event was getting to spend quality time with them.

Medal winners are listed below.